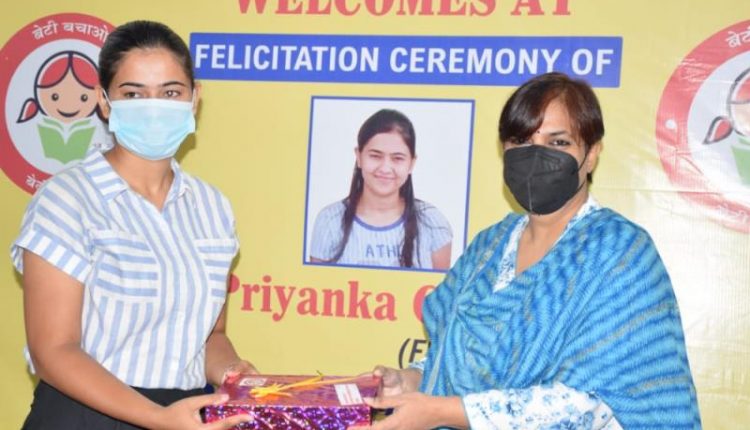 SAMBA;: District Administration Samba today felicitated Priyanka Chaudhary of village Kangwala for bringing laurels to her District as well as to Jammu and Kashmir UT by becoming a Flying Officer in Indian Air Force.

Sharing her experience and dreams, Priyanaka Choudhary said “I come from a family which has the defence background as my father and grandfather have served the Indian Army and I decided to carry forward the legacy”.

“I want to prove myself at the Academy and later in serving my country as an Air Force Officer. My parents always supported me and were on my back. They as well as my teachers were my inspiration”, she added.

Deputy Commissioner Samba Anuradha Gupta while felicitating the daughter of Army soldier, nominated Priyanka Choudhary as Brand Ambassador of Beti Bachao Beti Padhao for District Samba. The DC hoped that her story would inspire many young girls, especially in district Samba, to achieve their dreams. The DC hailed efforts of Priyanaka Choudhary which resulted in inspiration for one and all. “Priyanka as well as her parents deserve all the accolades as they have set a great example in our society” added DC samba.

The public of Samba in general and girls in particular felt elated with joy as this promising girl from a border village proved that nothing is impossible provided one has determination and a fixed aim.

Priyanka Chaudhary’s father Ujjager Singh and other relatives were also present at the felicitation ceremony.

Reopening of schools: DC Rajouri reviews arrangements; Over 12000 students to be tested