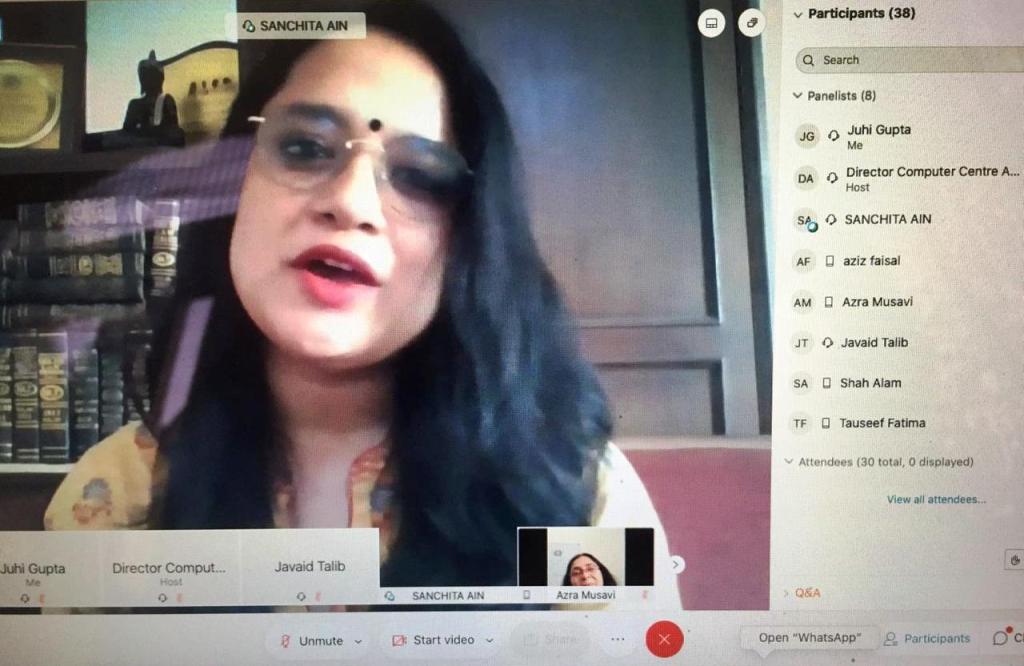 Aligarh: Sanchita Ain, an alumna of AMU and advocate on Record of the Supreme Court of India of India, explained that the gender-based violence is still a global menace and it will remain so unless the fundamental inequalities are addressed.

She was delivering a lecture on ‘Gender based Violence and the Law’ organised by the Advanced Centre for Women’s Studies, Aligarh Muslim University (AMU) through a live video transmission.

Sanchita delineated the factors for gender based violence and discussed various types of gender violence and the legal remedial measures available for protecting and redressing the cases.

Asserting that the discrimination on the basis of gender is the most invisible form of gender based violence; Sanchita stressed the need of developing guidance for building systems to eliminate gender-based violence, support programs for professionals experiencing trauma, interventions to disrupt the gender-based violence cycle and scaling up prevention efforts that address unequal gender power relations.

In the presidential remarks, Prof Javaid Talib (Department of Law) said that gender violence is faced by women all over the world.

“According to National Family Health Survey, 30 percent of women in the 15 to 49 years age group face physical violence in India, while six percent have been victims of sexual violence at least once in their life,” he pointed out.

“Majority of the sexual violence cases go unreported to avoid the social stigma,” he concluded.

The lecture was attended by the students of gender studies and beyond from universities across the country and the world, and it evoked enthusiastic response, said Prof Azra Musavi (Director, Centre for Women’s Studies), who also delivered the welcome address.

Dr Aziz Faisal extended the vote of thanks.