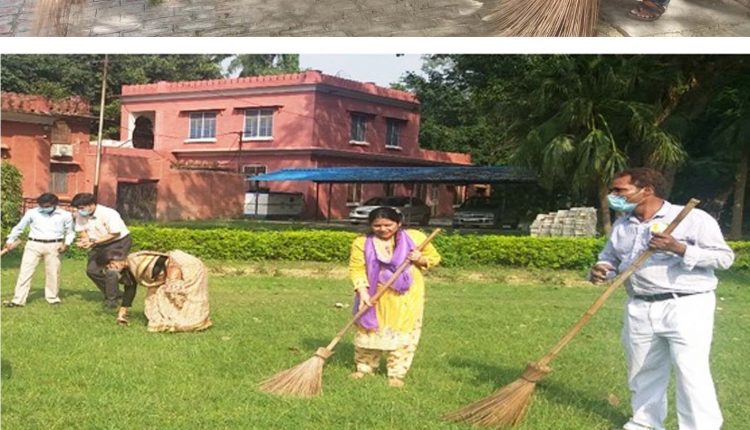 Aligarh : Faculty members, students and non-teaching staff of the Department of Education, Aligarh Muslim University (AMU) pledged to work 100 hours every year to keep their neighbourhood spic-and-span and the Country neat and clean during the Gandhi Jayanti observations.

The online pledge was administered by Prof Nasrin, Chairperson, Department of Education.

She also urged the staff members to propagate the message of Swachh Bharat Mission in towns and villages.

Speaking on Gandhi’s education philosophy, Prof Nasrin said that the Gandhian Educational thoughts are relevant for development and providing solutions of the current problems like unemployment, poverty, corruption and many others.

Dr Mohammad Hanif Ahmad briefed about the various activities to be conducted under the sanitation campaign and also extended the vote of thanks.

After the online programme, Prof Nasrin with the department teachers, students and other staff planted saplings of flowering shrubs and fruit yielding trees in the unused areas of the department premises. A mass cleaning drive was also conducted, leaking water taps were fixed and old files were disposed of.

At the Department of Linguistics, faculty members and non-teaching staff with eagerness and avidity participated in the ‘Sanitisation Campaign’ held to mark the Gandhi Jayanti Celebrations.

“The campaign was conducted on the Government guidelines to curb the spread of Covid and other communicable diseases in the campus premises and to raise awareness on the harms of living in an untidy environment”, said Dr Sabahuddin Ahmad, Programme Convener.