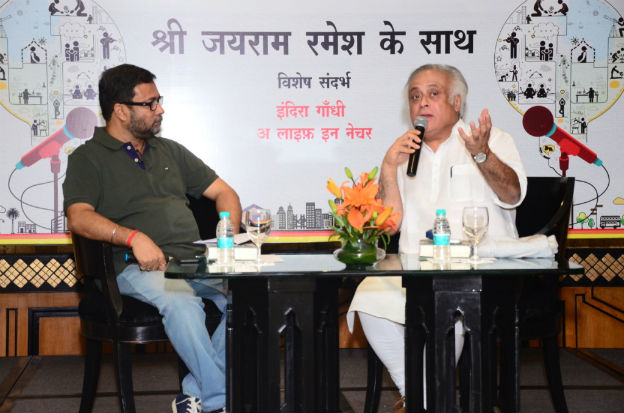 New Delhi: At the inaugural Jagran Vartalap Series organized at Radisson Blu Hotel on Sunday, former Union Minister and MP Jairam Ramesh was in conversation with senior journalist Anant Vijay on his new book ‘Indira Gandhi A Life in Nature’,. The Jagran’s Vartalap will also being organized in 10 other cities. Jagran Vartalap is an open forum where experts / eminent personalities from various fields share their views on wide range of topics and it is a two way communications where audience can question the speaker.

Jairam Ramesh said that Indira had imposed emergency in the country after pressure from the younger son Sanjay Gandhi and Jawaharlal Nehru’s daughter had withdrawn it, after she realized her mistake.

He said, “Indira Gandhi used to say that the people of our country worship nature, environment protection is in our lives and it is only in Indian culture that the bond between the nature and civilization is so strong.”, Jairam Said “This year also happens to be Indira Gandhi’s birth century year and this book is a tribute to her.”

He said, “We know Indira as either Durga and remember for Emergency, but very few people know that Indira was also very sensitive towards the environment. This book is about her attachment to nature. .

Jairam said, “I have been the Minister of Environment for 26 months from the year 2009 to 2011. During this time, I came to know that Indira Gandhi was very sensitive towards environment. From 1925 to 1940 Indira had written to her father Pandit Nehru about 250 letters and in most of these letters she had mentioned trees, birds, rivers, forests and so on. ”

He further stated that Indira Gandhi, as prime minister, fought for the protection of the environment even with her Chief Ministers during her tenure of 16 years. There are documentary proofs for this. The Chipko movement in Uttarakhand had a great impact on her. She also delayed the Tehri dam project for five years, and this project started only after her martyrdom.

In response to a question of Anant Vijay, Jairam Ramesh said that he disagreed with Indira’s two decisions- one, setting up of Mathura refinery and second, approval for setting up Navy Training Center at Chilka Lake in Odisha.