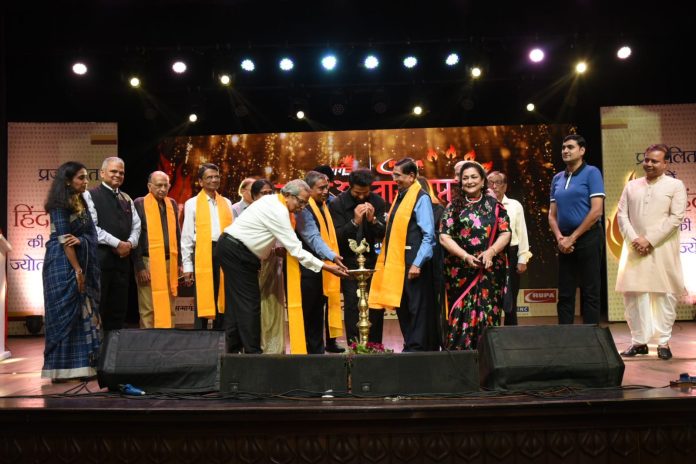 Kolkata : Sanmarg Foundation organised their 17th edition of Ram Awatar Gupt Hindi Protsahan 2022, the only award ceremony in India where students are felicitated for their excellent performance in Hindi. This award ceremony is an initiative of the Sanmarg Foundation to generate awareness amongst the youth on the importance of Hindi. The event was held at GD Birla Sabhaghar, Kolkata. This year also saw a successful Siliguri and South Bengal edition. The event was hosted by renowned television fame Rithvik Dhanjani. Along with that a special Rock performance by Revolution Band was organised for students across the city.

Established in 1946, Sanmarg is the largest circulated and most popular Hindi daily in eastern India, headquartered in Kolkata. It was founded by Swami Karpatri Ji Maharaj, and is based on the pillars of humanity and righteousness. Today, it is the only newspaper to reach every corner of Bengal, and covers all 23 districts of the state. It is also published from Patna, Bhubaneswar, Kolkata and Ranchi. Keeping up to today’s time Sanmarg is equally established in both print and digital media.

In 2001, Sanmarg Foundation, earlier known as (Sanmarg Relief Fund Kolkata), was founded with the aim to promote quality education to the masses through the language of Hindi. For the last 17 years, we have been honoring students, teachers, and educational institutions who have excelled in Hindi. We have supported and provided scholarships to students wanting to pursue higher education in Hindi. Further, we provide financial support to students from marginalized sectors.

Mrs. Ruchika Gupta, Director, Sanmard & Trustee, Sanmarg Foundation said while speaking to the media, ” Hindi is the language of Bharat and today when on one end we are celebrating 75 years of independence, it feels sad that a nation like India doesn’t have a national language. Hindi is the official language of the country and through our humble endeavor, ‘Ram Awatar Gupt Hindi Protsahan’, we aim to instill a sense of pride in the youth of today towards this noble language. Students are the future of the country and what they believe in today, India will follow tomorrow! This is the fire we wish to ignite!”