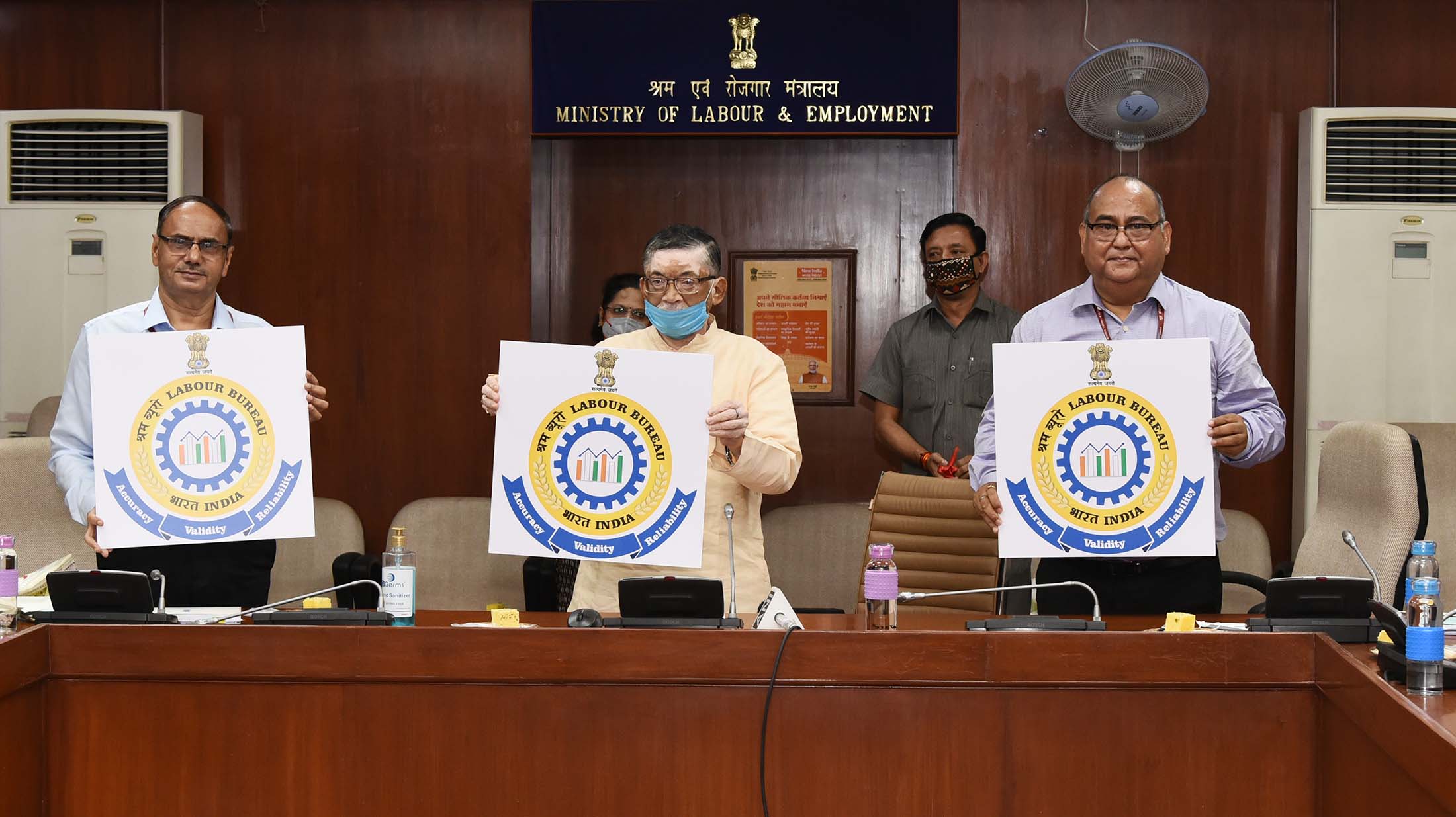 New Delhi: The official logo of Labour Bureau, an attached office of Ministry of Labour and Employment, was launched here today by Shri Santosh Kumar Gangwar, Minister of State (I/C) for Labour and Employment in the presence of Shri Heeralal Samariya, Secretary, MoL&E and Shri D.P.S. Negi, Director General Labour Bureau & Senior Officers of Ministry at Shram Shakti Bhawan, to visually communicate the vision and objectives of the Bureau.

While lauding the efforts Labour Minister mentioned that Labour Bureau was established as a Directorate of Cost of Living at Shimla in the year 1941 with the objective of conducting Family Budget Enquiries and compiling Cost of Living Index Numbers for important centers in the country on a uniform basis. The need for more comprehensive labour statistics in the context of formulation of labour policy led to the setting up of the Labour Bureau on October 1, 1946 by rechristening the Directorate of Cost of Living with added functions. Since then Labour Bureau is engaged in collection, compilation, analysis and dissemination of statistics on different facets of labour at All India level.

Shri Gangwar asked Labour Bureau to increase its outreach by way of total Digitalization of its processes & use of Data Analytics & Artificial Intelligence in its day to day operations.

Shri Gangwar underlined the importance of data base in policy making. He called for increased use of Information Technology to make available greater and more accurate data at within a very short time. Stressing the need for soon moving on to paperless working, Minister expressed confidence that digitisation and artificial intelligence will also help in collection & analysis of a large data in much less time. He further said that as Government is working in providing employment, the accurate data becomes very crucial for this purpose.

On this occasion both Minister & Secretary (L&E) told to media persons that century old 44 Labour acts are being subsumed in four codes, out of this wage code is already enacted & three codes i.e. The Social Security, Industrial relations & occupational Safety, Health and working conditions have already been Introduced in Lok Sabha and once enacted India’s ranking on “Ease of doing business” will go very high and India will be a dream destination for Investment and Labour Bureau should collect data in Seamless way for this necessary provisions in codes & rules will be provided to give Statutory Powers to Labour Bureau.

Labour Secretary also called upon Labour Bureau to gear up for 100 per cent digitisation and ensuring tracking investigators and surveyors. He asked the Bureau to prepare for data collection in the light of Labour Law reforms which may require changes in forms and types of data collection and methodologies.

The newly launched logo represents that Labour Bureau is a data based organization dealing in data related to workers and work. The logo also represents the three goals that Labour Bureau strives to achieve in producing quality data i.e. Accuracy, Validity and Reliability. Blue wheel is a cog wheel representing work, choice of blue colour Sinifies that we deal with blue collar workers, the graph is not going up words alone as in real world data has ups & downs because it captures ground reality. A tricolored Graph, matching the colors of the National flag, along with wheat ears, signifying the fruit of rural agricultural labour, has been beautifully placed in the logo.

The mandate of Labour Bureau is to act as a storehouse of important economic indicators like Consumer Price Index for Industrial worker, Agriculture & Rural Labour Numbers for Industrial, Agricultural and Rural Labourers; wage rate indices and data on employment/ unemployment, industrial relations, socio-economic conditions in the organized and unorganized sector of industry etc. The Labour Bureau is a Apex National Level organization in the field of labour statistics which performs significant functions such as Labour Intelligence, Research, Monitoring/evaluation & training.

Rhodes University: Fifty alumni to be honoured as the School of Journalism and…

iednewsdesk Apr 7, 2022
The School of Journalism and Media Studies (JMS) will mark its 50th anniversary by honouring 50 of its most…