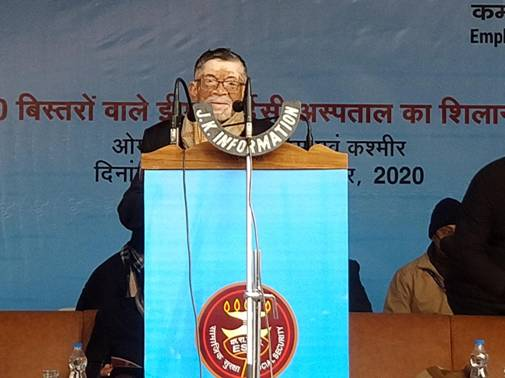 The four-storied, 100 bedded hospital will be built over an area of five acres and will provide services covering 23 specialities and three super specialities. The facility will come up at an expenditure of Rs 160 Crore and is expected to be completed in the next one and a half years. Besides covering registered Insured Persons (IPs), the healthcare facilities will also be available to the general population.

Speaking on the occasion, Shri Gangwar said that ESIC has been working for the past 66 years and has a presence in over 80 per cent of the districts of the country. He said that Srinagar has around 20 thousand IPs and they deserve the best healthcare as is available to their counterparts in other regions of the country.

He added that no citizen should be bereft of the benefits of social security coverage. He also highlighted the strategic role played by ESIC hospitals in fighting the current COVID-19 crisis.

On the occasion, Lt Governor Jammu and Kashmir Shri Manoj Sinha said that this is a historic day when we talk of the healthcare scenario of the Union Territory of Jammu and Kashmir. He thanked Prime Minister Modi and Shri Gangwar for their efforts and expressed hope that the population of J&K will benefit immensely from the facilities that will be made available at this hospital.

Secretary, Ministry of Labour and Employment (MoLE), Shri Apurva Chandra said on the occasion that ESIC has over 3 crore direct beneficiaries and when the number of their dependents is also taken into consideration, the total touches around 13.5 crore individuals which is almost 10 per cent of the total population of India. Appreciating the efforts of Labour Department, J&K, Shri Chandra said that these efforts will bear fruit when residents of Kashmir will get access to best healthcare facilities with the coming up of this hospital.

Smt Anuradha Prasad, Additional Secretary, MoLE & Director General ESIC, while addressing the gathering, said that the hospital was always high on the priority of GoI but was delayed due to the Corona Virus pandemic. She added that as soon as the scenario improved, the government expedited its plan and because of that, today’s function was possible.

Best quality healthcare facilities will be provided to ESIC beneficiaries of primarily Srinagar, Budgam, Pulwama, Shopian, Anantnag and Kulgam districts of Kashmir division through this hospital.

Other dignitaries from the Union Territory administration and Central Government Departments were also present on the occasion.