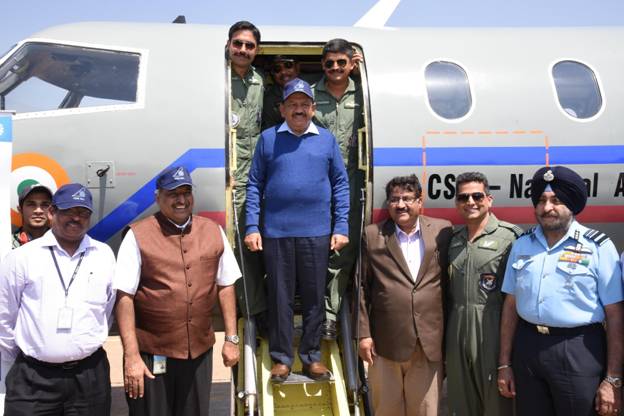 This was the second of the 20 test flights planned for SARAS PT1N, before freezing the production version. The first successful test was carried out on January 24, this year. The design and development of the aircraft is being done by CSIR-National Aerospace Laboratories, NAL. According to NAL, the production model design is expected to be ready by June-July this year.

Congratulating the CSIR-NAL scientists and the commanders of Indian Air Force – Aircraft and System Testing Establishment, Science & Technology Minister Dr Harsh Vardhan said, the flight commanders deserve special appreciation, for their courage to fly an aircraft, which was rejected earlier. Minister announced commendation award for the Commandant and the test crew of ASTE.

“The project was dumped by the previous government, after an accident during test flight in 2009. Though the Directorate General of Civil Aviation, DGCA had exonerated the aircraft from any design flaw or poor-quality production, no effort was made to revive the project,” said Dr Harsh Vardhan, who was present during the second test flight today. “The credit for reviving the indigenous project goes to the present government headed by Narendra Modiji, who had given a thrust to ‘Make in India’ mission. It is the culmination of joint team efforts of ASTE, DGAQA, CEMILAC and HAL”, the minister said.

Dr Vardhan said, CSIR-NAL proposes to get the SARAS-Mk 2 version certified initially for military and subsequently for civil version. He said, SARAS will be 20-25% cheaper than any imported aircraft in the same category. The improved version will be a 19-seater aircraft instead of 14-seater.

“The unit cost of the aircraft, with more than 70 per cent indigenous content, will be around 40-45 crores as against 60-70 crores for imported ones and has far more benefits than what the imported aircraft offer,” said Dr Harsh Vardhan.

“SARAS Mk 2 will be ideal for commuter connectivity under Government of India’s UDAAN Scheme for variety of applications like air taxi, aerial search/survey, executive transport, disaster management, border patrol, coast guard, ambulance and other community services,” said Dr Vardhan. He added “Its successful development will be one of the game changers in the history of civil aviation in India.”

The aircrafts currently available in the international market are of 1970’s technology, such as Beechcraft 19000D. Dornier-228, Embraer EMB 110. They have higher fuel consumption, lower speeds, unpressurised cabin, high operating cost and unsuitable for operations from hot and high-altitude airfields. After India began its light transport aircraft project, countries like Russia, China, USA, Indonesia and Poland have launched new programmes for development of next generation 19-seater aircraft.

Director General of CSIR Dr Girish Sahni said, the cost of development and certification of SARAS Mk2 will be around Rs. 600 crores with a time period of about 2 to 3 years.

“IAF is committed to test and thereafter induct the first indigenously designed and manufactured Light Transport Aircraft. IAF is fully supporting this programme and the design and configuration of the new version of SARAS would be frozen soon,” said Air Vice Marshal Sandeep Singh.

Earlier, Dr Harsh Vardhan inaugurated the Airport Instrumentation Facility and visited an exhibition organized on the Fast Track Translational Projects of CSIR-NAL. He further dedicated this unique facility where flight control and avionics integration of civil aircrafts can be carried out at single point and also visited the Wind Solar Hybrid System of CSIR-NAL.

iednewsdesk Jul 23, 2021
On 23 July, the first students graduated from the Laurea Magistrale programme (equivalent to Master of Science)…