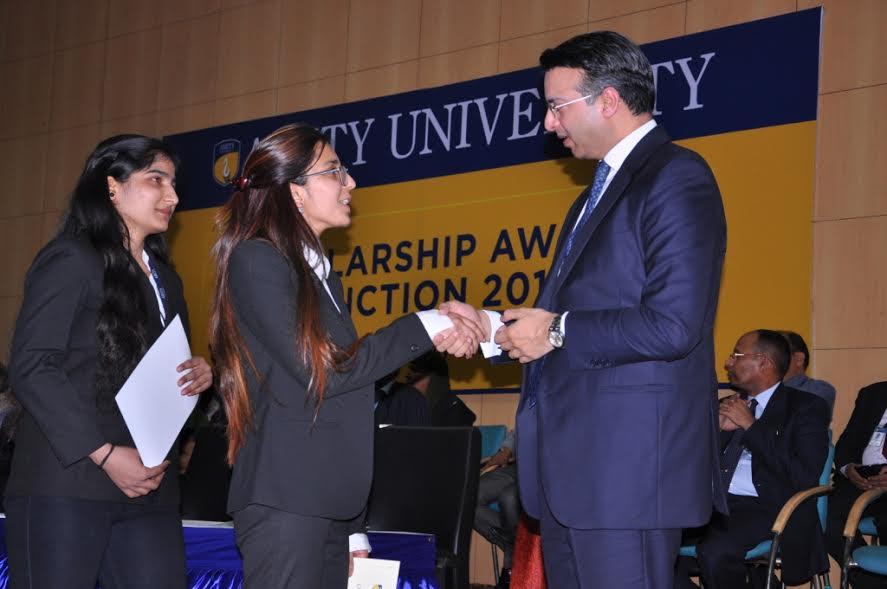 Congratulating the meritorious scholars, Dr. Atul Chauhan, Chancellor, Amity University Uttar Pradesh said that it is delightful to witness the presence of large number of parents and grandparents who have come to be a part of the special moment of their wards. He shared that in last five years, Amity has established campuses across 10 countries and further announced that in next 2 weeks, Amity will launch the biggest CBSE School in the heart of Dubai. Dr Chauhan stressed that Amity has complete faith in Amitians and has placed greater responsibility upon them for changing the society for better. He acknowledged that scholarships are very important and make a big difference in the lives of the students. Dr. Chauhan expressed that he is extremely proud of the achievements of students and advised them not to rest on the present laurels but to aim higher. He called upon the students to keep moving and not to relax even for a single day as someone might take them over. Dr Chauhan encouraged the awardees to be a good human beings, to stay humble and not letting the success get into their heads.

Grandmother of Ahuti from Amity Law School, Noida thanked Amity for awarding scholarship to her granddaughter for fourth time. She stated that it is the hard work of students, faculty members and blessings of the elders which lead to success in life. She commended Amity for the great transformation witnessed in her granddaughter and wished lofty heights of success to Amity

Student Shreya Jain, a student of Amity Business School expressed her gratitude for being awarded the Scholarship and expressed her pride to be part of Amity family which believes in holistic development of each student. She stated that every Amity student is groomed to be a global leader who will not be only a thorough professional but a good human being also. She appreciated the industry oriented and hands on approach adopted by the Amity which has helped her in bagging a job in a well-known company, even before the completion of her programme.

Proud father -Prof. Ashish Sengupta whose daughter is studying Applied Psychology, congratulated all the recipients and expressed his deep gratitude for tireless efforts by the faculty members in grooming the students. He lauded the infrastructure, faculty members and opportunities provided by Amity to every student. He thanked the management of Amity for instituting large number of scholarships for promoting the talent and encouraging the students.

Student Rohit Sardana- a fifth time recipient of Scholarship from Amity Law School, Centre II thanked Amity for scholarship and said it is the combined efforts of parents and faculty members that led to him earn the scholarship. He advised his students to not let ego and pride overpower them since humility is the key to success.