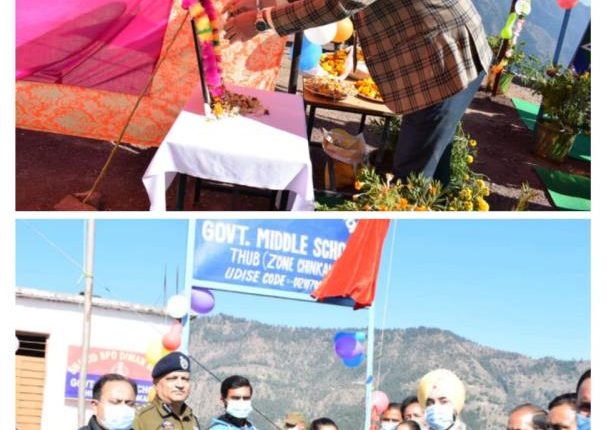 We are indebted to supreme sacrifice of Martyrs: DC

The formal ceremony started with the Guard of Honour followed by paying of floral tribute to the Martyr.

On the occasion, the local students presented an emotional tribute to Shaheed SPO Shri Diwan Singh who was also a school alumnus.

An engaging, enthralling and scintillating theatrical performance was presented by the Sangam Theatre Group Reasi which further aroused emotional pride among the audience.

Speaking on the occasion, the Deputy Commissioner Reasi reiterated that martyrs are the pride and inspiration for all future generations and remain immortal for their act of immense sacrifice, valour and selfless service to the motherland. He emphasized that we owe our freedom to the martyrs who ensure that the citizens live peacefully by making supreme sacrifice for the nation.

The Deputy Commissioner also expressed his gratitude to the family members of martyr SPO for their strength and courage. He assured them regarding the commitment of District Administration Reasi towards their well being and future endeavours and endowments. As a mark of gratitude towards the bereaved family, the District Commissioner Reasi also assured financial assistance to the daughter of late Shri Diwan Singh for pursuing higher education and handed over the certified copy of updated revenue record of the said family during the event.

While addressing the gathering, the Deputy Commissioner said that it is a wonderful initiative by the Government through which our present and coming generations shall learn about the supreme sacrifices of the martyrs and will nurture a feeling of nationalism among the citizens. He also emphasized on the need to celebrate such events in the memory of martyrs so that it always remains etched in the memory of people. Speaking on the occasion, the SSP Reasi said that the police department shall always be indebted to the family of the martyr and assured all support to the family. The formal ceremony concluded with the National Anthem.