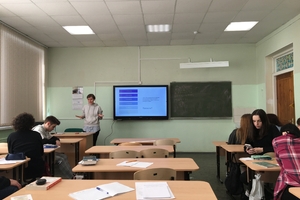 Schoolchildren studying at Gymnasium No. 17 in Petrozavodsk took part in the Swedish version of the popular television game “100 to one”.
No, Swedish television did not reach Petrozavodsk, it was the students of PetrSU that reached the schoolchildren.

Anna Potashova, a 2nd year master’s student of the Department of German Philology and Scandinavian Studies at PetrSU, gave an interactive lesson for schoolchildren, where she spoke about the culture of Sweden. Presentation slides about favorite dishes, famous people of the country and the most popular traditions and inventions of Swedes were hidden behind cards, each of which had a different “value”. The participants of the game had to “strain” their erudition, find information on the Internet and guess the most popular answers to questions about the country in order to get more points and overtake the opposing team.

There were also some tricks. For example, all the participants were convinced that the most famous artistic hero from Sweden is Carlson. In fact, this character is only so popular in our country. And the hearts of all Swedes are given to another heroine of Astrid Lindgren – Pippi Longstocking. But the school nicknames – active users of the Youtube platform – immediately guessed the most famous real resident of Sweden, who turned out to be the blogger PewDiePie, and the most unknown invention of this country is the Swedish monkey wrench.

In addition, Anna spoke about the specifics of teaching at the department, the rules of admission to the university and favorite cathedral holidays.

“Traditional costume as a mirror of Karelian culture”