Science exhibition showcasing innovative concepts by school students of Amrita Vidyalayam with support from Ministry of Earth Sciences,Embassy of Israel 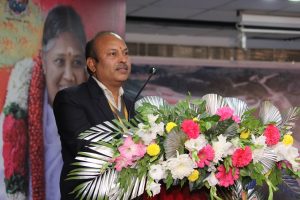 The exhibition showcased innovations, ideas, concepts, prototypes and models made by school students. The creativity of the students came to the fore in ingeniously and creatively crafted projects such as Dronah- 4D: Door to door delivery by drones; Angada Pathah: Piezoelectric roads equipped with piezoelectric sensors that can produce electricity; Khadyotah: Bio-luminescent trees used as street lights; Aquaponics: sustainable method of food production combining aquaculture and hydroponics and Artiﬁcial River Technology: Artiﬁcial rivers that hydrate the drought-prone areas with excess water from ﬂooded rivers, among others. 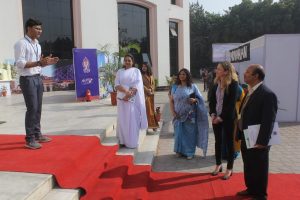 Some of the latest inventions and discoveries displayed by Israeli scientists included seedless grapes, Sniffphone mobile disease diagnostics, doxil for treatment of cancer, Exelon for treatment of dementia and a robot for spine and brain surgery. The exhibition also saw the participation of the Indian Meteorological Department and Vigyan Prasar, an autonomous organisation under Department of Science and Technology.

Speaking at the event Noa Hakim, Political Advisor, Ministry of Foreign Affairs, Embassy of Israel said, “It is a matter of great pleasure for me to be present here amongst such bright students as their creativity is truly inspiring. This exhibition especially makes me feel proud since Israel has always been at the forefront of nations promoting science and innovation as international values around the world. The Israeli climate has been such that we became experts on water conservation and later on in recycling and desalination. In an effort to feed its growing population, Israel’s agricultural capabilities had to yield ‘more crop per drop’, so it invested in research and development to find the best species to grow in its climate. Israel’s solutions in agriculture, water, defence and more are being adapted and adopted all over the world, including here in India. I feel deeply enthused to be here as I am taking away a deep insight into the future of things to come from the students of Amrita Vidyalayam.” 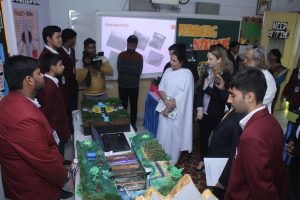 Dr. Jagvir Singh, Scientist ‘F’, Director & Head, Awareness & Outreach Program, Ministry of Earth Sciences said, “It is quite refreshing to see the students of Amrita Vidyalayam coming up with such brilliant and innovative concepts and models that will dominate the Indian landscape by the year 2040. Climate change has become an alarming reality. In the last one year itself temperature has increased by one degree Celsius leading to many changes in sectors like agriculture, health and water. Monsoon rain patterns are also changing leading to excess of rain in certain areas and scarcity in some others. My young friends here are the future of India and world and with their insightful and creative work they can tide over the crisis. Under the mentorship of their able teachers and the potential these students have, I am definitely looking forward to a better Bharat.”

Bri. Samapika, Principal Amrita Vidyalayam, New Delhi said, “A vision is a picture or idea, which helps one to pursue dreams and achieve goals. It opens our minds to the endless possibilities of the future and connects us with our passion and greatest potentials. It is a matter of immense pride for me to see how creative and brilliant my students are. They have not only portrayed the future of the world in the exhibition, but have given careful attention to minute details offering viable solutions for sustainable development. Now, the onus is on us to involve our children in the quest for knowledge. They are the building blocks of the nation and the future lies in their capable hands. All radical changes begin with a humble step, and todays exhibition is the maiden step towards a future that today’s youngsters will shape. I would like to make a special mention of the Embassy of Israel and the emissaries who represent the country for taking out time and coming here. Special thanks go to the representative of Ministry of Earth Sciences, India Meteorological Department and Vigyan Prasar.”

Prof. M. S. Krishnan Kutty, Chairman, Career Competency Development, Amrita Vishwa Vidyapeetham said, “It is a great moment for me to come here and address you all on the idea of a vision 2040. We need to strategise to realise this vision we have in our minds and I am sure with the blessings of Amma, the hard work of the principal and the teachers and students of Amrita Vidyalayam, the vision will undeniably become a reality. Just a decade from now robots will soon be taking over all human jobs and the only subjects that will really matter for students would be the STEM or Science, Technology, Engineering and Mathematics. The skills being imparted to students in Amrita Vidyalayam are making them future ready and giving them a holistic upbringing. Education comes through value ethics, which is ingrained here in every student thus making them ideal candidates for making the vision 2040 a grand success.”

IIT Bhubaneswar campus placements 2022-23 off to a promising start

IIT Roorkee bags “The Most Innovative Research Institute of the Year”…