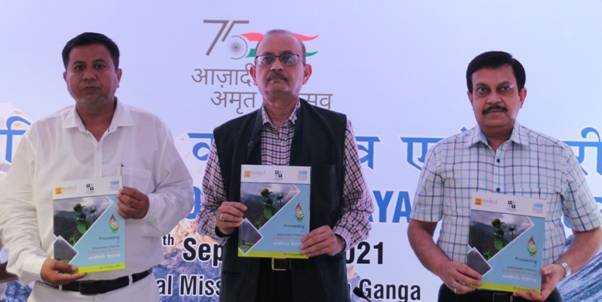 New Delhi: The National Mission for Clean Ganga organised Himalayan Diwas in association with Naula Foundation. This year’s theme is ‘Contribution of Himalayas and our responsibilities’. The event was part of the ongoing celebration of ‘Azadi ka Amrit Mahotsav’. Himalaya Diwas is celebrated every year on 9th September in the state of Uttarakhand. It is celebrated with the aim to conserve Himalayan ecosystem and region. It was officially declared as Himalaya Day in 2015 by the then Chief Minister.

Explaining the significance of Himalayas, Shri Rajiv Ranjan Mishra, Director General, NMCG raised concerns over unplanned urbanization in the Himalayas, and said, “Himalayan hill towns face several challenges because of poor building planning & designs, poor infrastructure (roads, sewage, water supply etc) and unprecedented cutting of trees. This causes serious ecological issues.” He added that there is an urgent need to develop eco-sensitive hill town plans and designs. “We cannot have similar master plans for cities in plains and hills,” he said. He emphasized that the Himalayas are a source of strength and a valuable heritage not only for India but the entire world and we need to preserve them. Mr Mishra said,”This can be made possible with scientific knowledge along with community involvement and we welcome Naula Foundation’s efforts”.

Padma Shri Kalyan Singh Rawat in his key note address said, “Himalayas are a source of medicinal plants which makes Ganga water special and gives life to not only Ganga but many smaller streams.”

Congratulating on the occasion of Himalayan Diwas, Prof Vinod Tare, Founding Head, cGanaga, IIT Kanpur shared a draft of Uttarakhand river’s atlas. He informed that this project of developing river’s atlas intends to map all rivers in Uttarakhand and give them a unique identification number. Speaking about the efforts of Naula Foundation in conserving the Himalayan ecosystem, Shri Bishan Singh, President Naula Foundation underscored the need of focusing on traditional methods of water conservation and working with local communities.

Proceedings of ‘Stakeholders Webinar on Pahad-Paani-Parampra’ were released at the event. The webinar was organised on 10th, 11thand 12th June, 2021. It was an excellent opportunity for policymakers and decision-makers to sensitize them on the drying-up of springs and the crucial role of spring-shed management in implementing similar programs and to share experiences. A technical session on emphasising the need of Ganga Rejuvenation for Sustainable Himalayas was conducted at the event.Prof Rajiv Sinha, IIT Kanpur, Prof A. S. Maurya, IIT Roorkee and Prof Venkatesh Dutta shared ideas on various scientific aspects of conservation of Himalayas & its ecosystem.

NMCG understands the importance of the Himalayas which triggers the Monsoons every year. This greatly contributes towards the flow of the river Ganga and its tributaries. Understanding the contribution of the Himalayas, NMCG has sanctioned various projects, understanding the responsibility towards Himalayas. One such project is ‘Rejuvenation of dying springs in Tokoli Gad Catchment of Tehri Garhwal District using Geo-chemical & Geo-physical techniques’ by IIT Roorkee. NMCG has also sanctioned a project titled Cultural mapping of river Ganga from Gaumukh to Ganga Sagar by INTACH. Under the project, the tangible and intangible heritage of river Ganga and the cities, is being documented. Uttarkashi, Tehri Garhwal, Haridwar & Rudraprayag are the important Himalayan cities covered under the project.

iednewsdesk Jan 28, 2022
Twenty years’ worth of surveys suggest that nearly one in ten sexually active men in 35 countries in sub-Saharan…

University of Göttingen: Genome Atlas to support the rescue of…