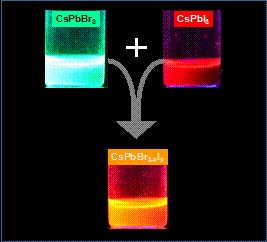 Scientists at the Centre for Nano and Soft Matter Sciences (CeNS), an autonomous research institute under the Department of Science and Technology (DST), found that though nanocrystals of inorganic chemicals caesium lead halide show the promise of white light emission, a very odd behaviour of the nanocrystals prevented them from keeping that promise.

Earth’s interior is swallowing up more carbon than…

The capability of white light emission rests in the fact that the emission from these crystals can be easily tuned over the entire visible spectrum by varying their halide compositions. However, they failed to emit white light due to an interparticle mixing between the nanocrystals that resulted in a single emission. White light needs the presence of red, green and blue spectra of light. So, once the crystals give a single emission, they miss the chance of creation of white light.

The team of researchers led by Dr Pralay K. Santra found that halide ions of the crystals migrate from one particle to another even at room temperature and form an alloy of nanocrystals, which yield a single emission. The findings from the present work were recently published in the journal ‘Nanoscale’. The understanding of this reaction kinetics will help in developing strategies to prevent interparticle mixing, and the team is pursuing research to create LED that produce good quality white light.

Multiple options for COVID 19 detection kits by start-ups on the cards through support of CAWACH Initiative of NSTEDB, DST

Earth’s interior is swallowing up more carbon than thought