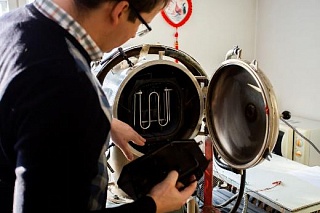 SPhTI TSU materials scientists have patented a method for obtaining a material for implants, that, under load, behave in the same way as living tissues of the body. The nature-like material is created based on  durable titanium nickelide, and with titanium powder additives, the scientists achieved elastic behavior and shape memory effect. The properties of the new material are comparable to how the bone tissues of the human body behave under physiological stress.

The task of TSU scientists was to obtain a material for implants that would be biocompatible, high-strength, corrosion-resistant, and durable. But at the same time it must be similar to the living bone tissues of the body. This material was obtained by adding Ti powder to a porous powder alloy based on titanium nickelide. The additives made it possible to regulate the porosity coefficient and at the same time achieve elastic behavior and shape memory effect.

– Living tissues change their shape under the action of a load not elastically, but according to a special hysteresis pattern. This is a very unusual process: at the beginning of deformation, the biological system strongly resists and quickly accumulates stress, but then it reaches a plateau – and then the deformation proceeds without increasing stresses. And during unloading, the biological system resists this unloading and, after removing external stresses, completely restores its original shape, – explains Sergey Anikeev, one of the authors of the development, senior researcher at the Laboratory of Medical Alloys and Implants with Shape Memory (SPhTI TSU).

The new material, whose production method was patented by the TSU scientists, behaves in the same way under loads. In the alloy based on titanium nickelide, due to the implementation of phase martensitic transformations, the same hysteresis dependence of the shape change under load appears. That is why implants made of this material meet the latest medical requirements in surgery, dentistry, and traumatology.

– Traditional implant materials such as titanium, tantalum, and stainless steel are not capable of exhibiting hysteresis under load. High-strength knitting needles, pins, and plates are made of them, so that under the action of loads in the human body they do not change their shape. It turns out that static conditions are created for work in the human body, in which everything is in motion. And our material lives with the body, – comments Sergey Anikeev.

An elastic porous material based on TiNi is capable of changing its shape by up to 6–7% without permanent deformation, that is, completely returning to its original shape after strong stretching or compression. Implants made with such an alloy have not only high structural properties, but also physical and mechanical parameters that are as close as possible to the bone tissues of the human body.