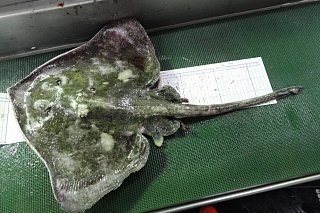 Scientists have discovered a new stingray and named it “six-eyed”

A Russian-Japanese group of researchers, which includes Aleksey Orlov, the chief researcher at the Russian Federal Research Institute of Fisheries and Oceanography (VNIRO) and the TSU Biological Institute, has discovered a new species of stingrays. A previously unknown member of the species of this cartilaginous fish was caught in the region of the central Kuril Islands. Because of to its external features, it was named Bathyraja sexoculata – six-eyed stingray. It is assumed that this species is endemic; it lives locally and only in the waters of Russia. The find is described in an article published in the prestigious international scientific journal Zootaxa.

– Several individuals of this species were caught by my colleague Ilya Gordeev from VNIRO and Moscow State University, during a commercial voyage in the fishery for the northern one-finned greenling in the region of the central Kuriles (Simushir Island),- says Alexei Orlov. – The scientific name of the new stingray is Bathyraja sexoculata, which literally means “six-eyed”. I suggested this option because of three pairs of light spots on the disc and head of this species. The official name is given according to the place of catch – Simushirskiy stingray.

According to the ichthyologist, outwardly, the new species is hardly distinguishable from closely related members of the subgenus Arctoraja – the rays Bathyraja (Arctoraja) smirnovi and the shield-bearing Bathyraja (Arctoraja) parmifera. However, the CO1 gene sequence in the find turned out to be unique, which made it possible to establish the status of this species as previously unknown to science.

After the genetic examination, Russian scientists sent the sequences (nucleotide sequences) and photos to their Japanese colleagues Hajime Ishihara and Ryo Misawa. Comparing them with their own genetic data of already known rays, which were absent in the Genbank, the Japanese experts came to the conclusion that the species discovered is new to science.

This was followed by their visit to Moscow, to the Zoological Museum of Moscow State University, where VNIRO staff handed over a standard series – five specimens of skates. For two days, Japanese ichthyologists studied these specimens and were convinced of the correctness of the preliminary conclusions. Based on the research results, a joint scientific article was prepared, in which the authors describe the morphological and genetic characteristics of the six-eyed stingray. Presumably, it is endemic, that is, it has a local distribution.

Project looks at links between poultry and antimicrobial resistance

TSU is among the leaders of the new RUR subject ranking