Ministry of Housing and Urban Affairs (MoHUA) today announced the initiation of the Open Data Week to encourage adoption of open data and promote innovation across India’s urban ecosystem. Leading up to the ‘Azadi Ka Amrit Mahotsav – Smart Cities: Smart Urbanization’ conference scheduled to be held in Surat, during February 2022, the Open Data Week is part of a series of pre-event initiatives being undertaken by MoHUA to promote awareness and use of open data. It will be conducted during the third week of January, i.e., from 17th January 2022 to 21st January 2022. 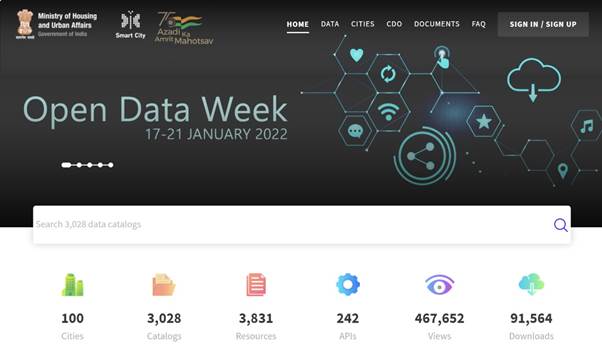 The Event will see participation from all 100 Smart Cities that will be publishing high quality datasets and data blogs on the Smart Cities Open Data Portal. Presently, more than 3,800 datasets and more than 60 data stories are already available on the Portal to various stakeholders to analyse this data and uncover actionable insights.

The Event aims to show the benefits of open data such as increased efficiency, transparency, a spur in innovation, and economic growth. It is divided into two segments – first, uploading of datasets, visualizations, APIs and data blogs on the Smart Cities Open Data Portal from 17th January 2022 to 20th January 2022 and second, celebration of a Data Day by all smart cities on 21st January 2022.

The Data Day will take place nationally across all smart cities and will include talks, seminars, hackathons, demonstrations, and trainings on different data tracks identified by the cities. The Day will see engagement of people from different backgrounds including government agencies, private sector enterprises, scientific and academic institutions, businesses, start-ups, civil society etc. The idea is to provide a platform that offers ample opportunities on how to continue creating and promoting the use of data that addresses complex urban issues, such as the ongoing COVID-19 pandemic.

The Event has been designed to promote the use of and spread awareness about data. There are also many different groups of people and organisations who can benefit from the availability of quality data. New combinations of data can create new knowledge and insights, which can lead to whole new fields of application. This can help governments in solving some of the most common problems faced by the citizens of any city and replicating the successful ideas in other cities.

All 100 smart cities are geared up for the event, making it a collaborative effort towards making Indian cities ‘Data Smart’. The Portal is available at https://smartcities.data.gov.in/

Azadi Ka Amrit Mahotsav is an initiative of the Government of India to celebrate and commemorate 75 years of progressive India and the glorious history of its people, culture and achievements. This Mahotsav is dedicated to the people of India who have not only been instrumental in bringing India thus far in its evolutionary journey but also hold within them the power and potential to enable Prime Minister Narendra Modi’s vision of activating India 2.0, fuelled by the spirit of Atmanirbhar Bharat.

Azadi ka Amrit Mahotsav is an embodiment of all that is progressive about India’s socio-cultural, political, and economic identity. The official journey of “Azadi ka Amrit Mahotsav” commenced on 12th March 2021 which starts a 75-week countdown to our 75th anniversary of Independence and will end post a year on 15th August 2022.

India Education Diary Bureau Admin May 21, 2022
Dr. Ashwath Narayan C.N., Minister of Karnataka for Higher Education, on Thursday, unveiled to the stakeholders of…