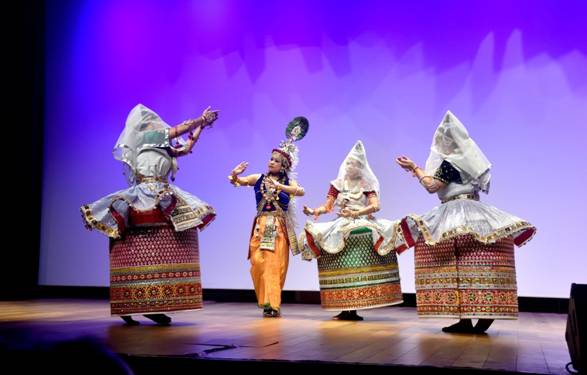 New Delhi: As part of the celebrations of Azadi Ka Amrit Mahotsav to commemorate 75 years of progressive India and the glory of its people’s culture and achievements, the National Museum, New Delhi is celebrating the rich heritage of North East India, under the Ministry of DoNER & NEC’s initiative titled “Destination NorthEastIndia”.The celebration at Museum was inaugurated on 1st November, 2021 and will continue till 7th November 2021.

On the 2nd Day of celebration of Destination North East India, dance and music of Manipur, Sikkim, Assam and Mizoram was organised. The forenoon session was started with Basanta Raasa Manipuri Dance related to Radha & Krishana performed by Panthoibi Jagoi Marup.It was followed by Bamboo Dance, a folk dance of Mizoram performed by Mizoram team and ended with Nepali Dance of Sikkim performed by Agragami dance and cine team.

The post lunch session was started with Goalparia folk Song by Agragami dance and cine team. The team performed 03 Folk songs related to Meaning of Life and Romantic. Then Bamboo Dance of Mizoram was again performed in central open rotunda to attract the visitors. At the end of day celebration was again filled with devotion to Love of Radha Krishna by Basanta Raasa of Manipur Dance performed by Agragami dance and cine team. The cultural performances were enjoyed by the audiences (Photos illustrated).

After the cultural performances the artists visited the North-East Gallery where the National Museum has showcases the contemporary Folk art and crafts.