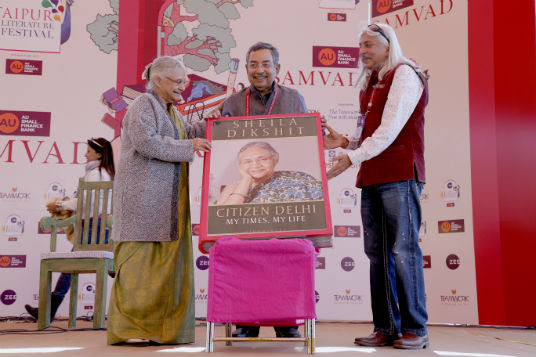 Second day of the ZEE Jaipur Literature Festival 2018 vibrant with diverse ideas of change, explorations in language writing, personal narratives and reflections on the republic

– Indian Languages and legacy of language writing explored in Sahitya ki Parampara, Samaaj ki Sanskriti,  Odia writer Paramita Satapathy on her explorations of private and public choices in the age of information, Manoranjan Byapari on Dr. Ambedkar and writing from the margins

Jaipur, January 26 2018 – Day two of the ZEE Jaipur Literature Festival 2018 resonated with its characteristic intense energy. There was  tremendous diversity in sessions, speakers, and themes, from the erudite to the effervescent.

The day’s highlights included many sessions relevant to the spirit of Republic Day including a discussion on Dr. Ambedkar and his Legacy,  Swachh Bharat: Taking Responsibility for Change (Dettol Banega Swachh India) which debated social, economic and political perspectives on the implementation of the Clean India Mission; Hamid Karzai’s The Great Survivor which had a packed audience as the former President of Afghanistan shared his perspectives on his country and its relations with India; and Republic of Rhetoric: Free Speech in India; alongside many other voices, from the popular to the pedantic.

“Congratulations to India on their Republic Day,” former President of Afghanistan Hamid Karzai exclaimed at the start of today’s session where he discussed his extraordinary life and legacy, and his gratitude to India for its key role in Afghanistan’s recovery and hope for the future. In conversation with Dalrymple, he spoke about the impact of the Soviet invasion in Afghanistan, recounting how after much difficulty getting back to his country, he, along with eleven others, walked for 36 hours to reach Kabul. He was shattered to see the state it was in. “Kabul was torn apart” in front of his eyes. The Taliban, Karzai said were an outcome of American involvement in Afghanistan and Pakistan, stating stated, “If you nurture vipers in your backyard you will be bitten!” For all the chaos and violence, Karzai has faith in the unity of the Afghani people. “The future of Afghanistan will be good because the people want it to be good.”

Anurag Kashyap paid homage to the role of cinema in social change, saying, “I credit the daring of earlier filmmakers, and am grateful to the upcoming generation, who will in their turn contribute to positive change through cinema. Creating change is like felling a Banyan tree little by little, with small blows, until it finally falls.”

Film-maker Vishal Bhardwaj ruminated on the challenges of adapting Shakespearean plays into film and in another freewheeling session, delved with the audience into a personal journey on the memory of love, denial and self discovery in a candid conversation withSukrita Paul Kumar, famous translator and critic. The audience got a firsthand glimpse into the mind of the genius who apart from being a music composer, director and singer recently launched his maiden book on poetry named Nude.

Focusing on the indefatigable vigour of our national languages were sessions such as Choices: The Private and the Public, featuring the prolific Odia writer Paramita Satapathy  and Sahitya ki Parampara, Samaaj ki Sanskriti, reinforcing the Festival’s inclusive stance. Manto: The Man and the Legend with Nandita Das and Nawazuddin Siddiqui drew huge crowds and vocal audience participation.

Analysing the vast paradoxes of contemporary India were sessions including Dreamers Looking at Young India, featuring feisty speakers like Snigdha Poonam in conversation with Akhil Katyal, Gaurav Solanki, Hansda Sowvendra Shekhar, Prashant Jha,Prayaag Akbar and Gurmehar Kaur. Kaur recalled, “When I found my grandmother’s old expired passport, I remember being a child [and] I was so angry to know that I am living with a woman from Pakistan. Don’t we all grow up with an image of the neighboring country being the enemy? One of the first lessons I learnt – there’s nothing wrong if you belong to that country. Over years I’ve realized that it’s not a religion or a country that is the enemy, it is the violence that we have within us”.

The ZEE Jaipur Literature Festival 2018 saw the fourth Ojas Art Award being presented to Anwar Chitrakar in the Master Category and his nephew Uttam Chitrakar in the Protégée Category, both of whom are Pattachitra artists from Bengal. The award was presented by eminent historian B.N. Goswamy, who, quoting Mirza Ghalib’s verse, likened the lucid and unwavering movement of the awardees’ brush to the motion of angels’ wings. Festival producer Sanjoy K. Roy spoke of the lack of institutional recognition and documentation of the art forms the production of which employs millions of families.

In Visible Work: Invisible Women, important questions around women within the workforce were raised, including how to make workplaces more inclusive.

China was in the spotlight with The Day of the Dragon: China and the Future of Asia, and reportage of conflict and war in The Frontline Club saw leading international war correspondents demystifying this fascinating career of chance and risk-taking.

At The Music Stage, literature joined hands with music, as audiences thrilled to the haunting tunes of Real Sugar featuring Paban Das Baul and Sam Mills, and Shilpa Rao and Talvin Singh. As part of the Heritage Evenings, Hawa Mahal hosted the worldwide premiere of The Troth: Usne Kaha Tha, a dance and music performance of a tale of love and loss, narrated through accompanying multimediaby UK-based Akedemi