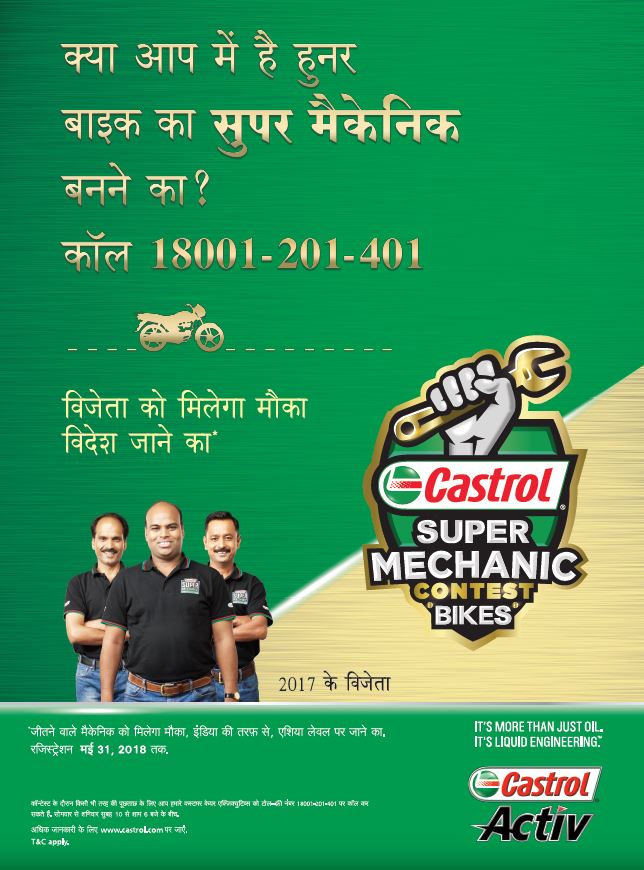 New Delhi: Castrol, India’s leading lubricant company, kicked off the second edition of one of the country’s biggest mechanic skilling and testing initiatives – Castrol Super Mechanic programme. Introduced by Castrol in 2017, Castrol Super Mechanic initiative is a skill imparting and evaluation programme aimed at honing mechanics’ skills and recognizing them by showcasing their knowledge and talent on a public platform.

The EU and India to further cooperation in leading climate…

Announcing the launch of the programme, Kedar Apte, VP Marketing, Castrol India, said: “The Castrol Super Mechanic programme has two elements – one is providing technical information and skills to the mechanics and the second is about testing their skills, with the winning team of mechanics emerging as the Castrol Super Mechanics of the Year. Last year we connected with over 50,000 mechanics and with this edition we aim to improve the technical skills of even more mechanics which will help improve bike maintenance standards in India”

The 2018 edition of the Castrol Super Mechanic programme commences pan–India with registration phase. Mechanics can call in on 18001201401and participate in a preliminary round which includes IVR (Interactive Voice Response) based questions. This will be followed by on -ground events which will be held in 8 cities across the country. The top three mechanics from each of the regional rounds will then join hands to form a regional team which will participate in the All India Castrol Super Mechanicfinal which will be held in October. The winners of the national final will represent Castrol India at the Castrol Asia Pacific Mechanic Contest which will be held in Bangkok later this year and will include participants from several Asian countries.

Zakir Hussain, winner of Castrol Super Mechanic contest 2017 (India leg) had this to say about the programme: “Being a part of the Castrol Super Mechanic initiative transformed my life. It was a great opportunity to compete with the best mechanics from India and other Asian countries and be recognized publicly for my talent and skill. My victory has had a positive impact on my business and I am inspired to upgrade my skills even further.”

Academic integrity is the need of the hour: Turnitin