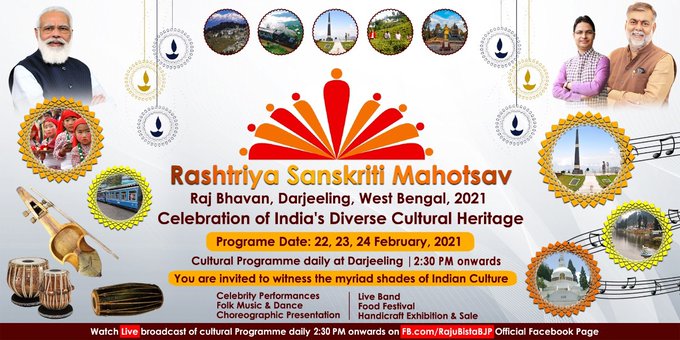 New Delhi: The second phase of the Rashtriya Sanskriti Mahotsav will be inaugurated by the Union Minister of State for Culture & Tourism (Independent Charge) Shri Prahlad Singh Patel on 22nd Februrary 2021 at Raj Bhawan in Darjeeling,West Bengal. The festival is being held from 22nd February to 24th February. The Governor of West Bengal, Shri Jagdeep Dhankhar will grace the closing ceremony on 24th February 2021. The Rashtriya Sanskriti Mahotsav is organised to promote the spirit of Ek Bharat Sreshtha Bharat.

The 3-day event in Darjeeling will begin with a choreographic presentation by Odissi Vision and Movement Centre, followed by recitals by Dona Ganguly (Odissi), Michael (Saxophone), Shayne Hyrapiet (Band).

On second day, there will be a Rabindra Sangeet recital by Sounak Chattopadhyay, a creative dance recital by Saphire Dance troupe, the North eastern band of Daniel Engti and Kamran and the Boyz Band. Last day will begin with Bail songs by Anuttam Baul, followed by Kathak Ballet by Sanskriti Sreyaskar and a dance drama.

On all days local artistes will be given an opportunity to perform on the RSM stage.There will be 20 crafts stalls from all over the country showcasing genuine hand-crafted products.

The Ministry of Culture is mandated with the task of preservation, promotion and propagation of Indian Culture, both tangible and intangible which inter-alia includes traditional folk dances and art forms, performing arts and rich tribal heritage. It organizes cultural programs, festivals and theatrical performances to fulfill this mandate.

RashtriyaSanskriti Mahotsav, the flagship festival of this Ministry organized since 2015 with the active participation of Seven Zonal Culture Centres has been playing a pivotal role to take the vibrant culture of India out to the masses instead of confining to auditoria and galleries. It has been instrumental in showcasing, folk and tribal art, dance, music, cuisines & culture of one state in other states reinforcing the cherished goal of “Ek Bharat Shreshtha Bharat” and at the same time providing an effective platform to the artists and artisans to support their livelihood. Ten editions of RSM have been held till date since November, 2015 in various states and cities such as Delhi, Varanasi, Bengaluru, Tawang, Gujarat, Karnataka, Tehri and Madhya Pradesh.

Renowned artists including local artists will be a part of this major festival. The RashtriyaSanskriti Mahotsav-2021 will cover a profusion of folk-art forms and it would offer the chance to experience the best in established and emerging virtuosity. The RSM will reconnect the people, especially the youth, with their indigenous culture, its multi-faceted nature, magnificence, opulence and historical importance in the context of India as a Nation over the millennia.

This RSM which is being organized in West Bengal will enhance mutual understanding and bonding between people of diverse cultures, thereby securing stronger unity and integrity of India.

University of Exeter: Major new history of the novel in French shows its impact from the medieval period to current day

Columbia University: They Found a Way to Thematically Sort All of…

Johns Hopkins University: Study Finds Up to 30% of Patients with Wet…

Johns Hopkins University: Study Supports Use of Remdesivir for…