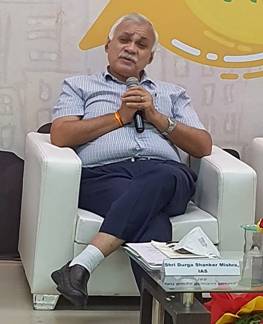 New Delhi: Secretary, Ministry of Housing and Urban Affairs, Shri Durga Shankar Mishra has called for developing cities withaffordable,livable andhouses having all-basic facilities to accommodate the increasing urban population and to achieve Hon’ble Prime Minister’s Vision India @2047. Addressing a seminar on “Inclusive Housing” today, he said that keeping in view the needs of the urbanlabour,migrant workers and other poor who come to cities for better future, we should build houses with all the basic facilities for them so that there are no more slums and the existing slums should give way to all-inclusive housing development. He said that we need to gear up to realise the dream of VISION INDIA@ 2047 by Hon’ble Prime Minister and embark upon City Beautiful Movement, i.e. Slum-free new development and de-slumification through redevelopment.

The seminar wasorganized by the School of Planning and Architecture, New Delhi.Pradhan Mantri Awas Yojana-Urban (PMAY-U), world’s largest affordable housing Missions, has launched a unique initiative ‘Awas Par Samvaad’ to propel ‘Housing for All’ as a universal theme. A series of seminars and workshops are taking place to take ahead Hon’ble Prime Minister’s vision of ‘Housing for All’ by 2022.

Speaking on the occasion, Secretary, MoHUA said, “Pradhan Mantri Awas Yojana (Urban) Mission has been providing access to housing with all basic amenities to people around the country. Government has created an ecosystem so that people can get a decent shelter and dignified living.”Shri Mishra said that urban transformation is a major challenge. When we achieve the target of Housing for All, it would be the beginning of New India. He said that PMAY(U) scheme is notonly for building houses but also to provide basic facilities of sanitation, water, electricity, cooking gas, toilets etc. to the houses.

Shri Mishra said that more than 1.13 crore houses have been sanctioned under the Prime Minister’s Awas Yojana in urban areas and 85 lakh houses have been grounded for construction. Beneficiaries have already moved in over 50 lakh housing units and we are all set to achieve the targets set under the scheme.

Speaking about the RERA, he said with the implementation of this law, various types of frauds and mistrust in housing sector have been contained. Model Tenancy Act, recently approved by the Union Cabinet,will make huge opportunity in the real estate sector in the country. After the implementation of this Act by the states, big chunk of urban population can be accommodated.

Shri Mishra said that this was the first time that over 3.50 lakhpersons living in unauthorized colonies in Delhi have registered on the portal developed by DDA to get the rights of land under the PM Uday Yojna. He said that the Government has created such an ecosystem in affordable housing sector where even the poor can dream of having their own house with all the basic facilities. It is a new beginning after the independence which will fulfil the most essential requirement of the urban poor of having a house.

About the Affordable Rental Housing Complexes (ARHCs), he said, “Earlier, the focus of the past housing Schemes was on ownership basis. But now we have ushered in a new era of rental housing for the first time after Independence. The Scheme addresses the Hon’ble Prime Minister’s vision of an ‘AatmaNirbhar Bharat’ by creating a sustainable ecosystem of affordable rental housing solutions for urban migrants/poor in cities. ARHCs provide urban migrants/poor a dignified and affordable rental living with necessary civic amenities near their place of work.” So far around 4000 affordable rental housing have come in operation in Surat, Ahmedabad and Chandigarh cities. Nearly 7000 are under different stages and recently we have sanctioned around 60,000 houses to be constructed by public /private agencies/organizations.

The Secretary also spoke about the Ministry’s initiative of bringing globally innovative technologies to the country for future use under the ambit of Global Housing Technology-India (GHTC-India)and the Light House Projects.

About the achievement of PMAY(U) scheme in North-Eastern States, Secretary, MoHUA said that more than one lakh affordable houses have been completed in these States and Tripura is leading with completion of 50 per cent of sanctioned while Assam have completed 23 percent of its share out of the total numbers of 3.7 lakh sanctioned for all these NE States.