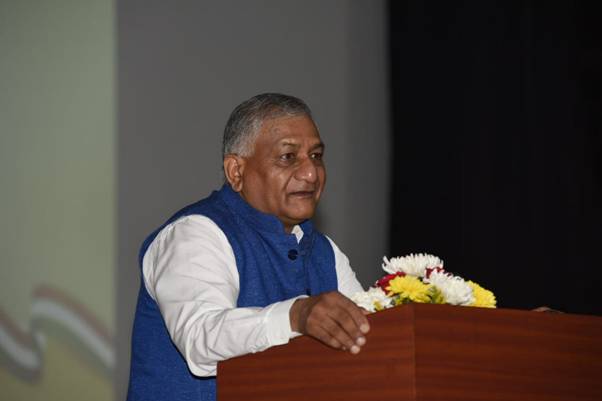 New Delhi : Ministry of Civil Aviation organized a Seminar on Vigilance Awareness at Indian Aviation Academy, here today. The Seminar on the theme ‘Independent India @ 75: Self Reliance with Integrity; स्वतंत्रभारत @ 75: सत्यनिष्ठासेआत्मनिर्भरता’, given by the Central Vigilance Commission was a part of the Series of Events organized by the of Civil Aviation to celebrate Azadi Ka Amrit Mahotsava. The purpose of the Seminar was to generate awareness about the ill-effects of corruption and strategize ways to eliminate corruption from public life.

Addressing the audience as Chief Guest, General (Retd.) Dr. V.K. Singh, Minister of State for Civil Aviation and Roads Transport & Highways, expressed confidence that the deliberations consequential to the Seminar would further strengthen our resolve to eradicate corruption and help build a New India.

Secretary – Civil Aviation, Shri Rajiv Bansal informed the gathering about the on-going processes in improving the systems and for bringing out SoPs to plug the scope of corrupt practices. He informed that Ministry has launched eGCA and eBCAS platforms where all functions, operational processes are being brought on computerized management command in Directorate General of Civil Aviation (DGCA)and Bureau of Civil Aviation Security(BCAS)respectively where public interaction is maximum.

Special Guest from CVC, Shri Sudhir Kumar, Addl. Secretary informed the gathering about several initiatives taken by CVC to eliminate corruption. He further informed about the provisions under PIDPI (Public Interest Disclosure and Protection of Informer Resolution, 2004) and how this has been instrumental & hugely effective in bringing down the scale of corruption since inception. Joint Director-CBI, Shri Pankaj Srivastava shared his experiences of fighting the menace of corruption in public life.

A book titled “Compendium on Systematic Improvements” was launched during the event. The book is a compilation of case studies based on thorough investigations by Vigilance Division of the Ministry and its associate organizations and suggests systematic improvements.

The Seminar was attended by a large number of senior officers and Heads of Organizations from Ministry of Civil Aviation, its attached and subordinate offices including Public Sector Undertakings: Airport Authority of India, Air India and Pawan Hans Limited.

Mahindra Logistics announces second edition of CATAPULT – a platform for…