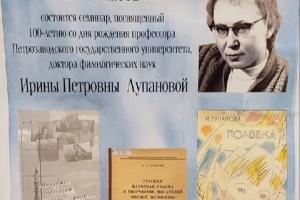 Seminar in honor of the 100th anniversary of the birth of I.P. Lupanova

A scientific seminar dedicated to the 100th anniversary of the birth of Professor, Doctor of Philology Irina Petrovna Lupanova was held at Petrozavodsk State University.
The organizers were the Department of Classical Philology, Russian Literature and Journalism (A.E. Rozova), the Department of Russian History (S.N. Filimonchik), the Department of the Joint Editorial Board of Scientific Journals (N.V. Rovenko).

The seminar was of an interdisciplinary nature, bringing together philologists, historians, biologists, teachers, and museologists. Invaluable assistance in its preparation and implementation was provided by the students of prof. Lupanova L. N. Kolesova, S. M. Loiter, E. I. Markova. The Scientific Library has prepared a wonderful exhibition of Irina Petrovna’s books and publications about her. The seminar was held on the basis of the Humanitarian Innovation Park of PetrSU, which took over the technical issues of work in ZOOM (E. P. Litinskaya and P. S. Voronina).

The seminar was opened by KG Tarasov, Vice-Rector for Academic Affairs, whose scientific interests are also related to children’s literature. In his welcoming speech, he emphasized the importance of the memory preservation event, especially for the students and undergraduates who participated in the event.

The problems of folklore, children’s literature, and the history of universities considered at the meetings were associated with the scientific and pedagogical activities of I.P. Lupanova. A systematic view of the creative and pedagogical heritage of the hero of the day, its role in the formation of the humanitarian culture of Petrozavodsk was presented in the report by Doctor of Philosophy. S. M. Loiter. In the report, Ph.D. EI Markova, dedicated to the problems of scientific ethics, emphasized the respectful attitude of Lupanova to the works of her predecessors, her mastery of a wide range of scientific methods.

The listeners were offered reports on the poetics and problems of the works of wonderful children’s writers of different eras: A. Gaidar (Doctor of Philology V.V. Golovin), P. Zasodimsky (Candidate of Philological Sciences L.I. Vigerin) , E. Uspensky (Ph.D. A. E. Rozova); The view of the folklorist on the comic in the work of S. Dovlatov was presented by Ph.D. N. G. Chernyaeva; Ph.D. A. D. Gusarov; reports of Ph.D. E. A. Safron and 4th year students of the Institute of Philology E. S. Kobko were devoted to the study of the specifics of Swedish children’s literature.

An interesting history of mentoring, and then cooperation of Irina Petrovna with Tatyana Ivanovna Senkina was highlighted by Ph.D. A.S. Lyzlova. In the message of Ph.D. A.M. Petrov raised the question of the problems of preparing an adapted literary retelling of legend and bylichka, and Ph.D. IN Mineeva shared interesting methodological developments concerning the organization of the so-called. club of young writers. A report dedicated to the originality of cooperative fiction for children and youth in the first third of the twentieth century was presented by Doctor of Historical Sciences. E.V. Dianova, and I.A.

The participants of the seminar heard reports on the history of St. Petersburg and Petrozavodsk universities, where IP Lupanova spent many years of research and teaching. In the report, Ph.D. T.N. Zhukovskaya structured various forms of interaction between the capital’s university and the urban community in the first half of the 19th century, analyzed the ways of representing academic culture in society. The Russian University of the middle of the XX century as a communication space based on the book by IP Lupanova “The Past Is Passing Before Me” was characterized by Ph.D. S.N. Filimonchik. Several reports were devoted to the history of higher pedagogical education. A.V. Bashev presented the technology he developed to search for biographical materials of the leaders of the Udmurt Pedagogical Institute of the pre-war and war period; E. A. Kalinina considered the problems of organizing the educational process at the department of physical education of the Karelian Pedagogical Institute in 1956-1965. The seminar allowed for a more capacious presentation of the role of the Lupanov family in the development of pedagogical education in Karelia thanks to the reports of Dr. Biol. n. EF Markovskaya “To the 130th anniversary of Pyotr Andreevich Lupanov” and VG Kondratyev “Alexandra Georgievna Bonch-Osmolovskaya: pages of life”.

Summing up the results of the work, the participants of the seminar noted the importance of studying various topical scientific problems through the personality of the scientist, proposed different forms of their consideration.

Durham University: Our Arts and Humanities subjects are ranked in world’s top 30

Participation in the international seminar of the Euro-Arctic region