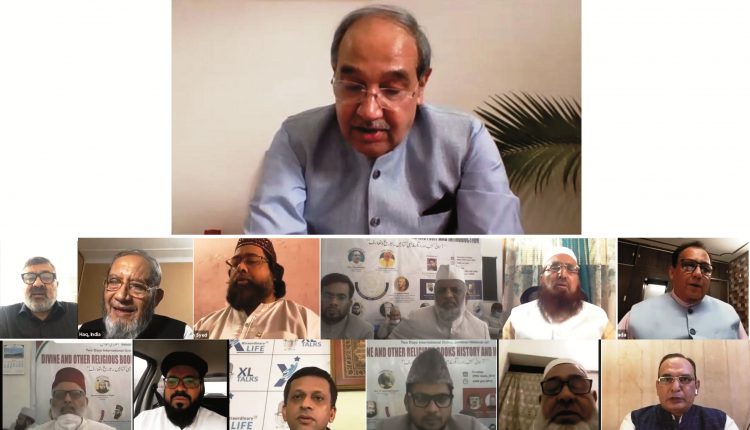 Seminar on Divine Books and Other Religious Books: History and Introduction concludes

Aligarh : Maulana Syed Shah Sibtain Hedar, (Sajjada Nasheen , Mahrara Sharif), while addressing the concluding session of a two-day international seminar on “Heavenly Books and Other Religious Books: History and Introduction” held at the Faculty of Theology, AMU , said that the West gave the world a dangerous concept of clash of civilizations. The message of love and cooperation between religions and civilizations from the East should be propagated. The people of different faiths should embrace this mission together. AMU can play a leading role in this.

Maulana Sana-ul-Huda Qasmi, Nazim Emirat-e-Shariah of Bihar and Orissa, said that Islam forbids belittling other’s religion, it is need of the hour that all the intellectuals from the society and leaders of all religions should come forward to strengthen an atmosphere of coexistence and global peace.

Prof Iqtdar Mohammad Khan (JMI) said that the majority of the world believes in religion which binds community and provides salvation. It is a major pillar of reformation for human kind.

Dr Mufti Zahid Ali Khan, (Department of Sunni Theology, AMU) said that it is paramount to propagate positive and moral teachings of all religions. We need to understand and accommodate the otherness of the others which is the epitome of all faith.

Public Relations Officer of AMU Omar Peerzada said India represents composite culture and is based on a secular ethos with vibrant democracy. AMU’s residential status promotes unity in diversity. The chief guest on the occasion of AMU’s Centenary celebration, the Honourable Prime Minister has very well phrased AMU as a Mini India.

Asad Mirza, a former official at the British Embassy in New Delhi, said there is a need to publicize the common denominator of different religions through the media and discourse. Universities can incorporate the basic moral teachings of religions into the curriculum.

Maulana Omar Abedin (Gen Sec. All India Milli Council , Telengana), said that at present some religions are being targeted in a planned manner, which is harmful to the pluralistic society.

Atif Hanif, Secretary of AMUOBA Lucknow, said that Sir Syed had emphasized on understanding the teachings of different religions and creating harmony among the people of different faiths around one and a half hundred years ago.

Maulana Nadeem Al-Wajidi, a well-known religious scholar based in the United States, said that misunderstandings between religions are deliberately spread and they need to be answered on a scientific and with practical approach.

Dr Abdul Haq, Professor Emeritus (Delhi University), said that religions not only impart spiritual teachings but it is also a living awareness of creative literature.

Delivering the presidential address, Prof M Saud Alam Qasmi, Dean, Faculty of Theology, said that there was a need to bridge the gaps between the people of different faiths and remove misunderstandings. University scholars can do this very well. Interfaith dialogue and reason and mercy can reduce the world’s violence, he added.

The coordinator of the program, Dr Nadeem Ashraf, requested the delegates from different countries to review the articles and send them for publication.

Convenor of the program Dr Raihan Akhtar said that the next seminar would focus on different teachings of religion with exclusive sessions.

University of Edinburgh: Yellow emojis not neutral symbols of identity