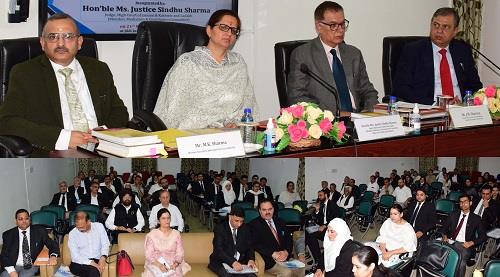 Sensitization programme held on “Contemporary Issues in Mediation, Role of Referral Judges in Process of Mediation”

Senior Advocates and Trained Mediators, Supreme Court of India, J M Sharma and Rakesh Khanna, were the resource persons in the programme.

In her inaugural address, Justice Sindhu Sharma highlighted the significance of mediation as an effective instrument for ensuring resolution of disputes. She stated that settlement of disputes in an amicable way is the hallmark of civilization and in this context, the concept of mediation has now become a global phenomenon.

She underlined the importance of mediation as a structured and party centric mechanism where litigants arrive at a mutual settlement with a sense of satisfaction. She further emphasized the need for a comprehensive legislation related to mediation for the larger benefit and satisfaction of litigating parties and society at large. She also underscored the need to continuously train judges in fundamentals of mediation mechanisms and to promote synergy between Judges and Advocate mediators for effective and amicable resolution of disputes.

J M Sharma, Senior Advocate, in his special remarks, said that mediation is a great responsibility and described mediators as warriors of peace. He underscored the significance of mediation and exhorted the legal practitioners to undertake mediation as an effective tool for dispute resolution.

Rakesh Khanna, Senior Advocate, in his special remarks, said that mediation is a germane concept in present day context of dispute resolution which fosters peaceful and healthier inter-personal relationships. He urged the judges to promote mediation and also laid stress on undertaking the e-mediation initiatives in bringing settlement to the litigation.

M K Sharma, Member Secretary, J&K LSA, in his welcome address, described mediation as a voluntary, party centred and structured negotiation process for peaceful resolution of disputes. While giving an overview of the programme, he said that it intends to sensitize and aware all stakeholders including referral judges and advocate mediators in creating an atmosphere for effective practice of mediation

The technical sessions were followed by an interactive session during which the participants deliberated and discussed various aspects of the subject topic and raised queries which were satisfactorily settled by the resource persons.

From Laggard to Leader; J&K witnesses completion of 65000 projects in 3 years

iednewsdesk Jul 4, 2022
The campus’s COVID-19 testing center is moving, but it isn’t going far.After conducting more than a million tests…