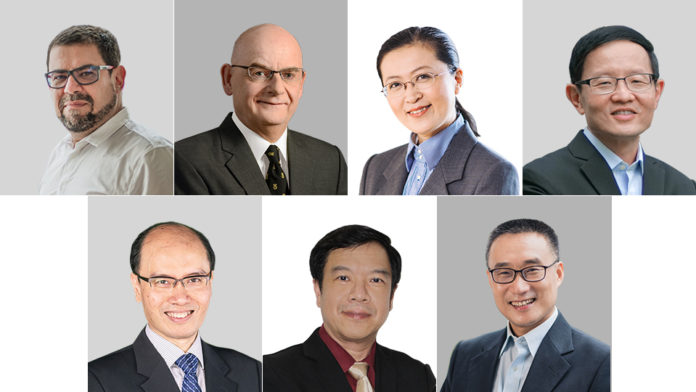 Seven researchers from NUS have been elected Fellows of the Singapore National Academy of Science (SNAS), an organisation that has the dual remit of promoting the advancement of science and technology in Singapore, as well as representing the scientific opinions of its members.

“SNAS elects Fellows who are outstanding scientists working or have worked in Singapore, recognising their good and impactful work for Singapore. They serve as role models, and are expected to advise and/or contribute to the government and other national organisations on various aspects of science including research, teaching, science policy, promotion and public communication of science,” he shared.
Professor Antonio Helio Castro Neto

Prof Antonio Helio Castro Neto is the Director of the NUS Centre for Advanced 2D Materials, Distinguished Professor in the NUS Materials Science and Engineering, as well as NUS Physics. He is also a Professor at NUS Electrical and Computer Engineering.

Prof Castro Neto is a materials scientist and condensed matter theorist who has achieved world recognition for his work in rare earths, actinides, and two-dimensional (2D) materials. He also develops transformative technologies based on 2D crystals.

Prof Barry Halliwell is Senior Advisor (Academic Appointments and Research Excellence), NUS Office of the Senior Deputy President and Provost, and Tan Chin Tuan Centennial Professor at NUS. He is also the Chairman of the Biomedical Research Council, Agency for Science, Technology and Research (A*STAR).

Prof Halliwell’s research focuses on the role of free radicals and antioxidants in human disease, particularly for Alzheimer’s disease and other brain disorders. His interest in identifying the most important antioxidants in the human diet, and in developing novel antioxidants, has critical bearing on treating human diseases, and understanding how diet might cause or prevent them.

He has received numerous research awards, including the 2013 President’s Science and Technology Medal, the Lifetime Achievement Award by the Society for Free Radical Biology and Medicine in the USA, for overall sustained excellence in the field, as well as the Ken Bowman Research Award from Canada’s Institute of Cardiovascular Sciences for outstanding achievements in the field of cardiovascular research.

Prof Lim is the inaugural NUSS Chair Professor, and Director of the NUS Institute for Health Innovation and Technology (iHealthtech). He is also the Founding Director of the Singapore Health Technologies Consortium.

She is a leader in the field of organic functional materials for energy and biomedical applications. She co-founded Luminicell, an NUS spin-off company that produces organic luminescent nanoparticles for imaging and therapy. Prof Liu Bin is the winner of the 2008 National Science and Technology Young Scientist Award, the 2016 President’s Technology Award, and the 2019 ACS Nano Lectureship Award.

Prof Ng Huck Hui is the Assistant Chief Executive of the Biomedical Research Council, A*STAR. He is also an Adjunct Professor at NUS Biochemistry and NUS Biological Sciences.

Prof Ng is renowned in the field of gene regulation and genomics, and his research group is developing diagnostic and therapeutics modalities for brain and liver diseases.

He conducts research in nanoscience and nanomaterials, and he was a recipient of Institute of Physics Singapore’s Nanotechnology Medal (Omicron Prize) and the Young Scientist Award.

Within the community of science teachers, Prof Sow is recognised for offsetting up the Science Demonstration Lab at NUS Science. As a dedicated teacher, Prof Sow has won many teaching excellence awards, and he received his Honour Roll in 2008. Prof Sow is actively involved in developing effective pedagogy in Science Communication and the Minds-on Approach to STEM education.

He is known for his work in plant molecular genetics and plant biotechnology. His research integrates molecular genetic approaches with advanced life science tools, to study the fundamental mechanisms of plant reproductive development and phytohormone signaling. The ground breaking findings from his work provide essential gene resources and mechanisms for crop breeding and urban farming, which in turn will help improve food security in Singapore and around the world.

Prof Yu’s research group created the first set of genome-edited crops in Southeast Asia, and these have been distributed to over 100 labs in more than 20 countries. His team is currently developing novel and high-value plant varieties with desirable traits for the production of food, medicine, and bioenergy.

Yale University: Insulin is an extreme financial burden for over 14% of Americans who use it

Yale University: Insulin is an extreme financial burden for over 14%...