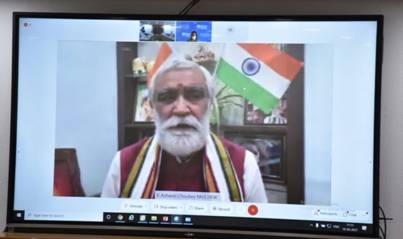 Taking note of the importance of this day, Shri Choubey observed, “Liver is second largest organ performing all vital function silently. It also faces the prime brunt of attack due to aberrant lifestyle.When the liver fails to repair and replenish itself properly, this leads to the development of Non -alcoholic Fatty Liver Diseases (NAFLD). Once the condition develops, there is no cure available and health promotion and prevention aspects are the mainstays to prevent the mortality and morbidity associated with NAFLD.” He put the onus of the fast-moving lifestyle of the country’s folk for this ‘kanjoosi’ (frugality)with their own health.

The Minister expressed his alarm at the role of NAFLD as a silent epidemic in India. It is estimated to afflict approximately 1 billion individuals worldwide (20-30 % of global population). In India, this prevalence widens to 9-32% of the population. This translates to the simple fact that out of 10 Indians, 1 to 3 persons will be having Fatty liver or related disease.

Shri Choubey took the occasion to urge people not to destroy their lives and those of their near ones through this ‘Kuthar-aghaat’and requested them to give up smoking, drinking, junk food; factors that contribute to the condition. He also urged them to keep a vigil on symptoms like snoring to gauge the health of their family members and seek medical consultation. Invoking the term ‘Mitta Bhukta’ and ‘Rita Bhukta’, he propounded the ancient idea that eating frugally and mostly those foods that grow in the season helps one achieve a long life.

USAID-NISHTHA in Partnership with Unilever Host a Virtual…

The Minister expressed his satisfaction at the steps taken by the Government in this regard. India is the first country in the world to identify the need for action for NAFLD and integrated NAFLD into the National Programme for Prevention and Control of Cancer, Diabetes, Cardio-vascular Diseases and Stroke(NPCDCS) which is a flagship national programme for NCDs.India contributes high numbers for non-communicable diseases globally but the core causes of metabolic diseases is in liver which would be addressed through this. He stated, “given the magnitude of NAFLD and its incurability, the prevention, control, and management of NCDs including NAFLD should be implemented in a mission mode and have more visibility as a people’s movement so that healthy living becomes a way of life for all the citizens of the country.” He was also apprised of the total number of NCD screenings conducted so far by the more than 75,000 strong CPHCs under AB-HWC program and plans to make the programme more efficient and people friendly. The training and inclusion of male counterparts to ASHA workers termed VISHWAS would increase hands and widen the net of Primary Healthcare.

Lauding Prime Minister Shri Narendra Modi’s vision of holistic health for all citizens, Shri Choubey said, “Health promotion and prevention aspects targeting weight reduction, healthy lifestyle, and control of aforementioned risk factors are the mainstays to disease progression and prevent the mortality and morbidity due to NAFLD. Presently India is facing double burden of communicable and non-communicable diseases which can be tacked through Preventive Care. With the Fit India Movement, Eat Right India, Government’s focus on Yoga, India has taken a unique path to combat this problem head on.”

Shri Ashwini Kumar Choubey ended his speech invoking the guiding principle, ‘Sarvey Bhavantu Sukhina, Sarvey Santu Niramaya’ as the spearhead of the government’s approach to holistic health and well-being for all Indians.

UPSC held a special meeting today to review the situation prevailing due to COVID-19 pandemic.

iednewsdesk Apr 6, 2022
Fans and alums have provided unprecedented levels of support for the Cardinal in the past year to help…

Massachusetts Institute of Technology: Solving the challenges of…