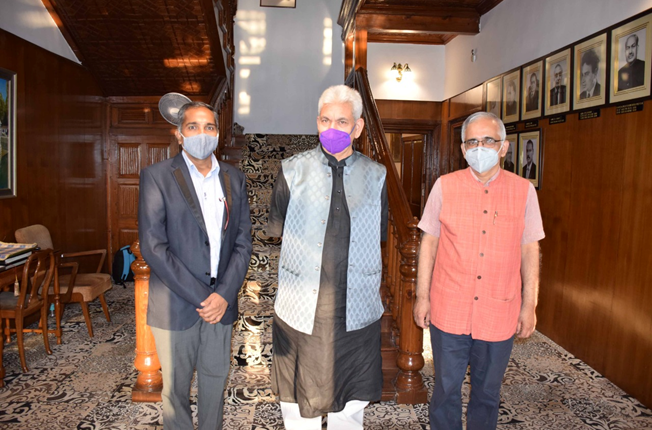 Srinagar: Dr Shekhar C. Mande, Director General, CSIR and Secretary, DSIR, visited the CSIR-Indian Institute of Integrative Medicine’s (CSIR-IIIM)Branch Lab in Srinagar and the Institute’s Field Station in Pulwama and took stock of the ongoing activities. Interacting with the women self-help groups and entrepreneurs associated with Lavender farming, Dr Shekhar Mande expressed satisfaction that the adoption of Lavender farming has brought a substantial enhancement in their income and employment generation. Dr Mande assured the farmers and entrepreneurs that scientific and technological advisory and support would be provided for further expansion of the crop, its processing, value addition and marketing to achieve self-sufficiency. He further emphasized the need for integration of apiary with aromatic crop production for maximizing farm productivity and profitability.

Dr D Srinivasa Reddy, Director CSIR-IIIM, Jammu, while highlighting the significance of the Field Station, Pulwama informed that the station had been the epicentre of industrial farming, especially Lavender for enhancing farmers income and women empowerment in the Union Territory of J&K. He also informed that CSIR-IIIM, intends to extend the different industry-oriented crops on a mass scale for the production of value-added products and other raw materials.

Dr ShahidRasool, Scientist In-charge of Bonera Farm in Pulwama, informed that a sustained approach through different projects, mission programmes, practical training and skill for producing and processing different crops are imparted.Farmers are hand-held for the commercial production of different crops through the supply of free quality planting, facilities for distillation of the harvested crop produce, market linkages and technical advisory.

DG, CSIR and the Director CSIR-IIIMmet Sh. Manoj Sinha, Lt Governor of J&K and apprised him about the introduction of Lavender and other high-value cash crops by CSIR in J&K. The DG-CSIR also informed the Lt Governor about the other CSIR S&T initiatives in J&K and offered implementation of the CSIR Technologies relevant to the J&K especially for societal development and rural empowerment.
The Lt. Governor appreciated the CSIR initiatives and also emphasized on scientific and industrial training of the talented youths of J&K. The Lt Governor desired that the information with regards to all the readily available technologies of CSIR may be shared with the J&K UT Government to have further brainstorming to explore possibilities of their implementation.For more than 35 years,CSIR-IIIM has been carrying out R&D studies on Lavender’s agro- and processing technologies for achieving higher productivity and quality indices. A high oil yielding variety knownas RRL-12 was developed by CSIR-IIIM. The Institute has been carrying out several State and Centrally sponsored mission mode projects like CSIR-Aroma Mission for mass scale cultivation of the crop. It is reported that the farmers cultivating Lavender achieve 5-6 folds more income (Rs 4.00 – 5.00 lakh per hectare) than the traditional crops. The lavender crop cultivation area in the UT has seen a surge inthe past ten years due to various initiatives taken and implemented by CSIR-IIIM, Jammu. Lavender is being grown in J&K over an estimated area of 900 acres with an annual production of 3000 Kgs of Lavender oil. The Institute is up scaling the acreage under the crop. It intends to cover an area of 1500 hectares in the next 2-3 years for achieving a sustainable production regime to meet the increasing demand for Lavender oil nationally and internationally.