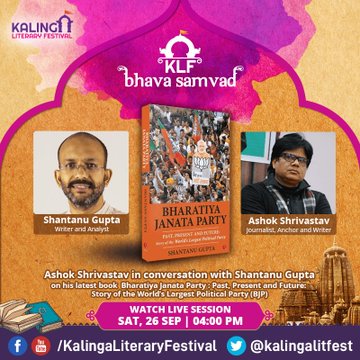 He said that he was driven by this thought about BJP that if it’s just a party or the political version of an ideology.

“I started with my research from Nehru Memorial Library after enlisting the content requirements. Secondary research is more in this book,” he quoted.

For any reader, the cover and title of a book becomes the first impression. Shantanu defines the title of his book by saying, “Title plays an essential part in the marketing of a book. This book ‘भारतीय जनता पार्टी की गौरवगाथा’ tells about the complete evolution of BJP and ends at the oath ceremony of 2019.”

However, the book doesn’t only speak about the glory of BJP, but the initiatives of the party towards Indian civilization. “I began writing the book with the idea that what I am losing in my country’s and my civilization’s culture and tradition. BJP, as a political party carries the agenda to preserve it and bring the lost glory back,” said Shantanu during the session.