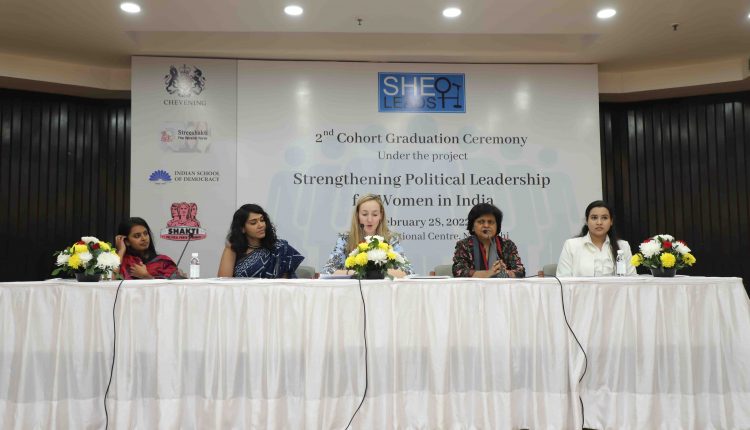 She Leads is ‘of the women, for the women and by the women’ for Equality in Political Space. In the 75th year of our Independence, while Panchayat reservation for women is successful, more effort is needed to increase the numbers at Vidhan Sabha, Lok Sabha and Rajya Sabha.

She Leads is a collective initiative of Stree Shakti – The Parallel Force, Indian School of Democracy co- founded by Hemakshi Meghani and Political Shakti founded by Tara Krishnaswamy. Indian School of Democracy is a non-partisan organization with a mission to nurture principled political leaders focusing on making political representation more value driven, inclusive and equitable. Political Shakti is a citizen’s collective campaign for increased women’s representation as MLAs and MPs.

The She Leads initiative led by Chevening Alumna Kanta Singh, is also supported by the UK Government’s flagship scholarship programme Chevening through its Chevening Alumni Programme Fund (CAPF). Speaking at the occasion, Supriya Chawla, Head Chevening Scholarships India said “This is a remarkable example of Chevening alumni creating lasting positive impact when they return to their home countries. We are proud of their achievements and their work towards transforming people’s lives, communities and helping create an equal, inclusive and better future. India delivers the largest Chevening programme in the world and at least half of those selected for the award each year are women.”

In the first cohort, launched in February’2021, SHE LEADS successfully trained 50 women from 13 states one of whom is fighting UP election from Meerut on a RLD seat. In this programme, Dr. Hena Gavit (BJP), Ghanshaym Tiwari (SP), Rajiv Gowda, Margaret Alva (INC), Archana Chitnis (BJP), Bandana Kumari (AAP) guided the trainees.

Rekha Mody (Founder, Stree Shakti – The Parallel Force) said, “Elected women and men leaders are welcoming this much needed support. We have waited for years for political reservation which is still a dream. I strongly believe that women will be the change agents in 21 century.”

Mahima Singh, Advocate at Supreme Court and spokesperson of Haryana Congress Committee, stated that “If the onus is upon me, and it is indeed upon me to take this dignified cohort places, I would take it to every level from the foundation school to the top institutions of the country”.

Dr. Heena Gavit (MP, BJP) said : “We should rise above identify politics, based on caste we should not caste our vote, development should be our criteria“

Kumari Selja (Indian National Congress) said, “Elections alone do not comprise politics. There are many facets of politics. Our party is committed to 33% of reservation for women“

Dr. Amar Patnair (MP, BJD) said, “Women need higher representation in politics because they deliver in all aspects of life.“

Priyanka Chaturvedi (MP, Shiv Sena) said, “I along with my party have been committed to the cause of delivering good governance.“