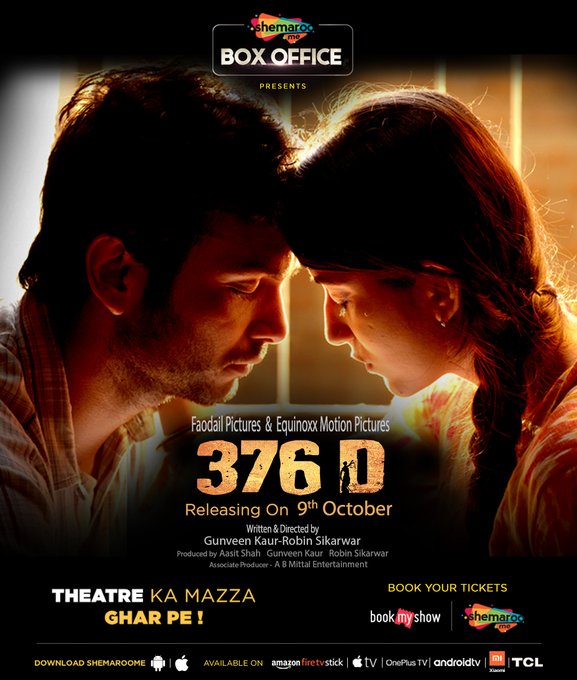 ShemarooMe Box Office to stream 376D, a gripping legal drama that will leave you shell shocked!

Mumbai: By serving a lip smacking buffet of unreleased films, ShemarooMe Box Office has always struck gold with audiences. They have managed to come up with spectacular content that truly turns each house into a personal movie hall. It now invites fans to witness a touching story that uncovers a few glaring loopholes in the Indian judiciary.

376D, as the name suggests, is based on the very section the film gets its title from. While the section deals with the horror of gang rape, the film comes up with a never seen before premise that discusses sexual assault, but not in a way that the viewers expect. It tells the story of two young men who face an uphill battle with the judiciary. Whether they get the justice they seek, forms the crux of this nerve wracking courtroom drama.

The film has already done the rounds in numerous national as well as international film festivals, garnering loud applause wherever it went. May it be Damini way back in the nineties or a Pink in today’s day and age, the audience has always responded well to films that explore the legal aspects of sexual crime. This time though, 376D challenges the viewer’s perspective towards the subject, confronting them with some uncomfortable truths about gender.

“As someone who comes from theatre, it is the greatest gift to be part of a film that offers so much scope for me as an actor. An artist always craves for such unique roles that contain maturity and depth” says Vivek Kumar, who plays the lead role of Sanju. “Since I was fresh out of professional training, it really helped in moulding my performance, making it as real as possible. 376D is honest, hard hitting and conveys an important message, kudos to ShemarooMe Box Office for backing us”, he concludes.

Deeksha Joshi, Gujarati cinema’s latest heartthrob, talks about her experience of working on the film, “It’s always satisfying as an artist when you get to portray different characters and work in all kinds of genres. My role is of a simple but modern woman who is an equal partner and not just second fiddle. Having been a student of gender and literature, I understood the finer nuances of this film’s subject and empathized with the sensitive and human story. I like that it pushes viewers to observe things from an open-minded aspect. Now that 376D arrives on India’s favorite streaming service ShemarooMe Box Office, I’m sure the audience will love our film as much as we did ”, she shares.

The film also sees some realistic and out of the box casting with practicing lawyer Sumit Singh Sikarwar essaying the role of public prosecutor Keshav Anand. “From a lawyer in real life to a lawyer on reel, it has been a wonderful journey, the only irony is that I’m a defense lawyer by profession but now move to the opposite side for the film”, he quips.

Priyanka Sharma who plays opposing counsel says, “I was very impressed by the razor sharp script and furthermore on how well layered yet restrained my character was. It’s always fun to step out of your comfort zone and work on such roles that are wordy but require a lot of control”.

Directors Gunveen Kaur and Robin Sikarwar can’t contain their excitement either. “The 9th of October is a day our entire team will cherish, we were all a bunch of young and passionate people who really believed in the film”, says Gunveen. Robin adds, “ShemarooMe Box Office has released some wonderful movies since its launch and the fact that 376D is making its debut on such an illustrious platform is immensely rewarding”

A powerful story, a talented cast and positive word of mouth, seems like ShemarooMe Box Office has a great weekend watch in store for us with 376D.

376D, starring Vivek Kumar, Deeksha Joshi, Sumit Singh Sikarwar and Priyanka Sharma and directed by Gunveen Kaur and Robin Sikarwar releases on the 9th of October 2020 on ShemarooMe Box Office. Tickets can be booked on the ShemarooMe website as well as BookMyShow.