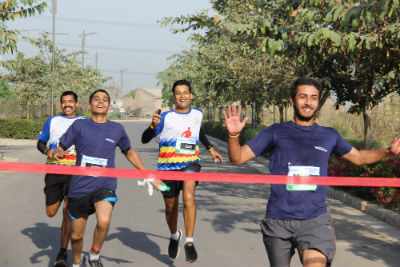 Shiv Nadar University hosts the 47th run of the record-making initiative of the Indian Army – the 50:50 Half Marathon

The marathon is part of the Platinum Jubilee celebrations of the Corps of Electronics and Mechanical Engineers (EME) of the Indian Army. During this run, a group of 10 Indian Army officers and soldiers are endeavouring to accomplish a unique task of creating history by setting a National and a unique Asian Record by running 50 Half Marathons in 50 straight days. Over the last month and a half, the soldiers will have covered a distance of 1055 kms across various venues in Delhi NCR.

The Corps of Electronics and Mechanical Engineers (EME) is an arms and service branch of the Indian Army. This initiative is being led by Lt Col Vishal Ahlawat, celebrated soldier of Corps of EME. Col. Ahlawat has many unique achievements under his belt including two successful attempts for climbing Mount Everest.

The 47th marathon event commenced at the SNU Campus in Noida yesterday and 10 soldiers along with nearly 300 students, staff and faculty from the university participated in the marathon. A Yoga session followed by the run was organized by expert instructors from the Ministry of Ayush.

Speaking on the occasion, Rajiv Swarup, President, Shiv Nadar University, said “The Marathon is more than just winning or participating in a sporting event. It is a demonstration of self-discipline and creation of a positive impact on society. Such initiatives always inspire us to push our limits and test the limits of endurance.”

Col. Vishal Ahlawat said he loves the city and such event. “It’s one of those events that I enjoy coming back to. The event has got bigger and better with every passing year and there is more awareness among the public. The marathon is run for promoting the cause of creating a healthy clean green pollution free India.”