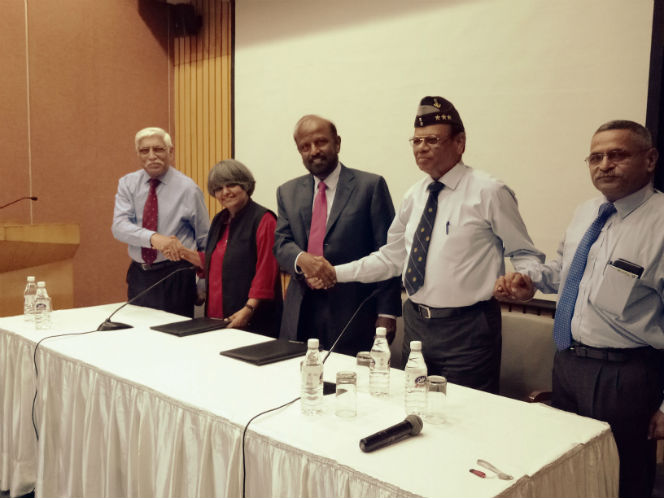 New Delhi: Shiv Nadar University and the Centre for Joint Warfare Studies (CENJOWS) have signed a Memorandum of Understanding (MoU) to collaborate academically on matters related to international relations, regional and global security. Dr. Rupamanjari Ghosh, Vice Chancellor of Shiv Nadar University and Lt. Gen Vinod Bhatia, CENJOWS Director signed the MoU in the presence of Dr. S.N. Balakrishnan, Chancellor of Shiv Nadar University and Lt Gen D.B. Shekatkar (Retd) at the India International Centre, New Delhi on July 24. The event was attended by members of the Government, the armed forces and academia.
International security concerns as well as changing requirements in the light of technological breakthroughs necessitate rightsizing of the armed forces and efficient use of the resources. This was the dominant theme at a panel discussion which was organised prior to the signing of the MoU. The panel discussion comprised members of the Shekatkar Committee, which was created by the Government of India to suggest measures to enhance the combat capability of the armed forces and reforming the defence budget. The Committee submitted its report in December 2016 and several of its recommendations are reported to have been accepted for implementation.
In addition to Lt Gen Shekatkar and Lt Gen Vinod Bhatia, Lt Gen Sanjay Kulkarni and Mr. R. Chandrashekhar – also members of the Committee – participated in the discussion. The members talked about important aspects of the report. In his concluding remarks, Chancellor Dr. Balakrishnan reaffirmed the Shiv Nadar University’s appreciation and gratitude to the armed forces for their services to the country. He also reiterated the University’s philosophy and commitment to creating knowledge and solutions that serve national needs.
This was the first public discussion on the report and the members thanked Shiv Nadar University for taking the initiative to inform the general public about its importance. The MoU marks another effort from Shiv Nadar University to forge linkages with institutions of repute to collaborate on critical areas of societal needs.