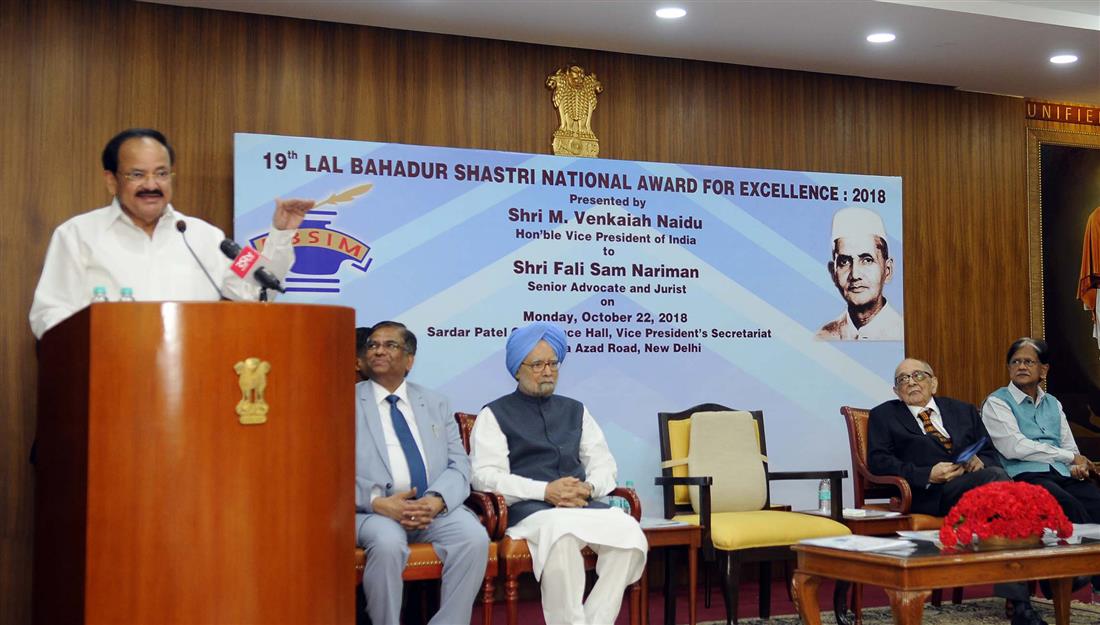 Citing the major mile stones of Shastri Ji’s life, from his active participation in the freedom struggle to his adorning the post of the Prime Minister of the country, the Vice President lauded his leadership style and the great acceptance he had among the people of India. Shri Naidu spoke of the various portfolios held by Shastri Ji in the Union Ministry from Railways to Communication to Industry. He recalled the time when Shastri Ji had resigned from his post as the railway Minister taking moral responsibility for a train accident. He added that this gesture spoke volumes about his integrity and moral standing and set new standards in constitutional propriety.

The Vice President remarked that Shastri Ji had great clarity of his vision and even greater conviction in the capacity of his beloved nation to beat all odds and survive. He observed that Shastri Ji’s 19 Month long Prime Minister-ship was quit eventful and described his various achievements from promoting Green and White Revolution to steering India successfully during the turbulent times of the India-Pak war of 1965.

The Vice President said that beneath a gentle and soft exterior, Shastri Ji carried an iron clad will power and added that Courage and humility are more complementary than contradictory. Shastri Ji made several tough decisions with great conviction when it came to India’s security and national interest.

The Vice President lauded the Lal Bahadur Shastri National Institute of Management for taking forward Shastri Ji’s vision of uplifting the masses and for nurturing moral values and societal responsiveness among its students. He congratulated the recepient of the 19th Lal Bahadur Shastri National Award for Excellence in Public Administration, Shri. Fali Sam Nariman and applauded his significant contributions to the field of jurisprudence.

The Vice President argued that the practice of law was a public service and that an officer of the court of law had certain responsibilities to the public. Agreeing that Shri. Nariman was truly an example to be emulated by practitioners of law around the world, Shri. Naidu said that he had always displayed an impeccable sense of justice, a deep sense of duty and profound concern for his fellow human beings.

Addressing the young people in the gathering, the Vice President reminded them that India required a clear vision, leadership and direction and expressed hope that the youth would serve as navigators who would take India forward in its quest for inclusive and sustainable development. He requested them to learn from the lives of men like Shri. Lal Bahadur Shastri ji and hoped that their sacrifices would grant inspiration and their teachings would give conviction to the youth of India.

The Vice President said that love for material things should not be the force that drives one forward and added that material things, wealth, possessions, would give only a fleeting illusion of joy. He revealed that true happiness and lasting peace would come from service, from making a positive change in someone’s life and from providing leadership to initiatives of nation building.