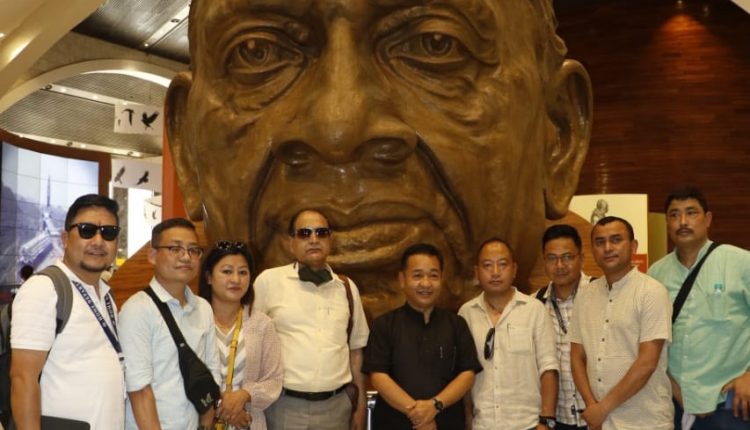 The 12-mile-long journey on foot commenced from Damman where he addressed the local gentries. The Hon’ble Chief Minister expressed his gratitude for the warm welcome accorded to the Sikkim contingent and asserted on building a strong relationship between the two states. He paid homage to the Father of the Nation, Mahatma Gandhi who had opposed the salt tax levied during the time and is considered one of the historic moments of the pre-independence era.

On the way, the Hon’ble Chief Minister was presented with mementos and also had a brief interaction with the people. The march concluded at Navsari, where a cultural programme was organised in the presence of Hon’ble Minister of Tribal Development, Tourism, Forest, Women & Child Welfare, Shri Ganpathsinh Vasava. The programme included performances from Gujarat and Sikkim showcasing the cultural vibrance.

The Hon’ble Chief Minister in his brief address stated that the representatives from Sikkim and he, himself, are fortunate to be a part of this momentous occasion. He added that Sikkim, in-spite of being a small state has walked hand in hand with the nation and has contributed handsomely to accelerate the process of nation building. He further said that Sikkim will continue to work in tandem with the nation and promote the Hon’ble Prime Minister’s call for ‘Atmanirbhar Bharat’ and under his able guidance, the Hon’ble Chief Minister believes the country will reach discerning heights.

He extended an invitation to the people of Gujarat to visit Sikkim and experience the vibrant culture, tradition and the salubrious ambience the state has to offer. He also stressed on bonding a strong relationship between the two states for mutual benefit.

The honourable Chief Minister Shri Prem Singh Tamang (Golay) also visited the famous Statue of Unity at Kevadia district, Gujarat. He paid homage to the great leader who is known for unifying the country. During his visit he interacted with the staff and wished for continuance of Sardar Patel’s vision of Unity in Diversity. He further added that we should respect and rejoice in the Largest Democracy for the betterment of our generations.