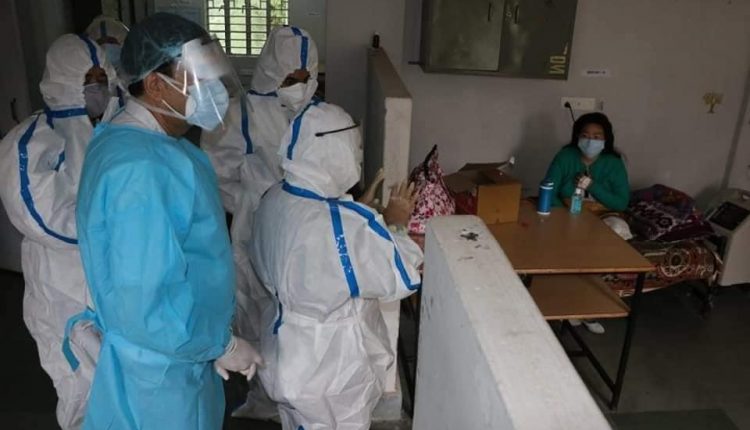 By India Education Diary Bureau Admin On May 31, 2021
Share
Sikkim: The Hon’ble Chief Minister of Sikkim Shri Prem Singh Tamang (Golay) along with his team went on an inspection tour of COVID Care Centres and hospitals in Sikkim and also announced the installation of oxygen supply plants in different parts of the state.

The inspection commenced early morning from Paljor stadium and then headed towards Saramsa. The Hon’ble Chief Minister interacted with the health workers, frontline warriors and enquired about the health of the patients at these centres. They also provided food, relief materials and essential items to the patients before heading for Namchi (South District).

In a brief program held with the Chairpersons, Zilla Adhyakshaya and members of Zilla Panchayat, President and members of Namchi Municipal Council, Additional Political Secretary, District Collector, Superintendent of Police, Additional District Collectors, Sub-Divisional Magistrates, Block Development Officers and officials of line department of South District, at the DAC, Namchi, The Hon’ble Chief Minister stated the government’s commitment towards enhancing the health facilities in the state. He asserted that the main purpose of their visit is to check the ground situation and thank the health workers, frontline warriors, police personnel for their dedication and service.

The Hon’ble Chief Minister reiterated that the Government is dedicated to having sufficient oxygen and informed them about the 1000 litres per minute Oxygen plant is being installed in STNM Sochyagang, 500 litres per minute in Namchi, 200 litres per minute in Singtam, 200 litres per minute each in Gayzing and Mangan hospital and plan to set up 500 litres in dedicated Covid Care Centre at Karfectar.
He urged the ADC(Development), BDOs, party functionaries to regularly generate awareness among the public and directed them to cancel social functions and be vigilant while taking care of asymptomatic patients which can be lethal if not taken care of. Emphasising the need for strict regulation in the rural areas, he added that village police will be deployed to ensure that the SOPs in the villages are being maintained properly and directed the line departments to be alert and active to help the poor and dependent people who become the victims of the pandemic.
The Hon’ble Chief Minister and team visited the Girls hostel, Namchi, where 17 patients are admitted and a few of them are under oxygen support. Equipped with a PPE kit and adhering to the protocols, he interacted with them and assured them that they will be cared for, and every help will be rendered to them.

Afterwards, the team also visited the Namchi District Hospital and interacted with the medical officers, staff and took stock of the situation. The Hon’ble Chief Minister also spoke with the patients and assured them of every possible help.

Further, he announced that the District Hospital, Namchi will have supplementary renovation with proper medical equipment, ambulances and instructed the concerned authority to ensure that patients do not face any difficulties.

Thereafter, the team visited the SICB, Karfectar to inspect the Covid Care Centre that is being set up to serve the patients of SouthWest districts. The concerned official and the health officials provided updates about the preparations and the Hon’ble Chief Minister directed them to render every possible support to the people.

Also, the police department has been directed to conduct strict surveillance of the areas and ensure that protocols are not being flouted.

Lastly, the Hon’ble Chief Minister and the team also went to Geyzing (West District) and visited the Village Administrative Centre, Geyzing-Omchung GPU, Geyzing Hospital and Nursing training centre. Again, donned with PPE Kit there, he inquired about the health of the patients in the centre and instructed the officials in charge to provide wholesome foods and supplements on regular basis.

The Sikkim Government has further mentioned that shopkeepers and vendors will also be tested, and a negative result will be required to run their business. This ensures the safety of their families as well as the customers.