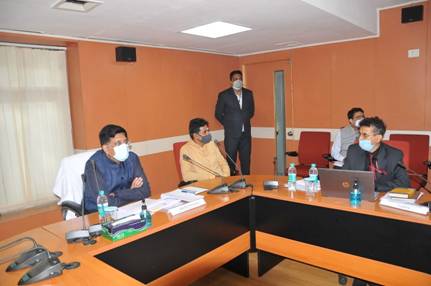 New Delhi: Union Minister for Commerce & Industry, Consumer Affairs and Textile, Shri Piyush Goyal has expressed satisfaction over the reforms introduced in examining and granting of patents, designs, copyrights and trademarks, saying the ‘ease of doing business’ will go a long way in catapulting India as an innovation hub.

The Minister reviewed the functioning of the Office of Controller General of Patents, Designs and Trademarks in Mumbai yesterday and deliberated on ways to build a robust Intellectual Property Rights infrastructure.

He emphasized Prime Minister Shri Narendra Modi has been closely monitoring developments in this field since 2014 itself.

Shri Goyal while speaking about the CGPDT’s speedy disposal of applications informed that, “The pendency in the IPR department has come down drastically. It has also been decided that any pending application should be completed within days and not months.”

The Minister added that emphasis has been laid on using Digital means. Every application is now processed online from start to finish, hearings are conducted on phones, people don’t have to travel to patent offices now.

Shri Goyal also made a few suggestions to make the whole process more user friendly. He called for more efforts to increase awareness about GI tag and its significance. He also asked to consider instituting scholarships for students studying the Intellectual Property law as well as engage faculty from renowned institutions on a part time basis to help in the patent examination process.

Officials of CGPDT briefed how the IP process has been simplified and streamlined than before and also about the re-engineering of the whole process including new timelines for disposal and shift to digital mode to promote ease of filing and obtaining services. For example, under Trade Mark Rules 74 Forms have been replaced by 8 Consolidated Forms.

They also mentioned that special care is being given to expedite examination of patents filed especially for applications filed by Startups, Women Entrepreneurs etc. While assessing impact of measures taken, it is noted that E-filing has increased from 30 % to more than 95%.

These developments have reflected positively in improvement of India’s ranking in Global Innovation Index. India has climbed 33 notches from 81st position in 2015-16 to 48th in 2020.

About the Office of Controller General of Patents, Designs and Trademarks

The Office of the Controller General of Patents, Designs & Trade Marks (CGPDTM) is located at Mumbai. It functions under the Department of Promotion of Industry and Internal Trade (DPIIT), Ministry of Commerce & Industry.

The Controller General supervises the working of the Patents Act, 1970, the Designs Act, 2000 and the Trade Marks Act, 1999 and also renders advice to the Government on matters relating to these subjects.

The Head Office of the ‘Patent office’ is in Kolkata, ‘Trade Mark Registry’ is in Mumbai and the ‘GI Registry’ is in Chennai. The Offices of ‘The Patent Information System’ (PIS) and ‘National Institute of Intellectual Property Management’ (NIIPM) are at Nagpur.