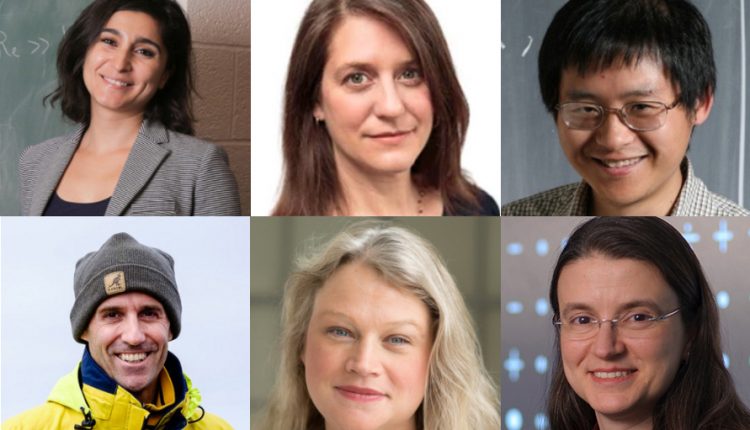 Six members of the MIT community have been elected fellows of the American Physical Society for 2021. The APS Fellowship Program was created in 1921 for those in the physics community to recognize peers who have contributed to advances in physics through original research, innovative applications, teaching, and leadership. According to the APS, each year no more than one-half of 1 percent of the APS membership, excluding student members, is recognized by their peers for election to the status of fellow.

Lydia Bourouiba is a physical applied mathematician and associate professor in the MIT Institute for Medical Engineering and Science, the Department of Mechanical Engineering, and the Department of Civil and Environmental Engineering, where she founded and directs the Fluid Dynamics of Disease Transmission Laboratory. She joined the MIT faculty in 2014. Bourouiba was selected by APS’s Division of Fluid Dynamics for “fundamental work in quantitatively elucidating the mechanisms of droplet impact and fragmentation and for pioneering a new field at the intersection of fluid dynamics and transmission of respiratory and foodborne pathogens with clear and tangible contributions to public health.”

Laura Grego is the Stanton Nuclear Security Fellow at the Laboratory for Nuclear Security and Policy at MIT. Grego was selected by the Forum on Physics and Society, a division of the APS, for producing significant, highly influential technical and policy analyses of critical issues in international security and arms control, especially in the areas of missile defense, space weapons, and space security, and for sustained activities that have engaged and educated students, colleagues, policy makers, and the public about these issues.

Hong Liu is a professor of physics and is a member of the MIT Center for Theoretical Physics. He came to MIT in 2003. Liu was selected for APS’s Division of Particles and Fields for “new discoveries in string theory and the application of string theoretic methods to understanding quark-gluon plasma and its probes in heavy ion collisions, out-of-equilibrium dynamics and equilibration, non-Fermi liquids, black holes, quantum entanglement, and hydrodynamics.”

Thomas Peacock is a professor in mechanical engineering. He joined the MIT faculty in 2000 and now directs the Environmental Dynamics Laboratory. Peacock was selected by APS’s Division of Fluid Dynamics for “pioneering investigations into the dynamics of internal waves and internal tides in the ocean using imaginative laboratory experiments and field studies, for the identification of Lagrangian coherent structures in turbulent flow, and the application of fluid mechanics to deep-sea mining.”

Lindley Winslow is an associate professor of physics and holds the Jerrold R. Zacharias Career Development Professorship. She first came to MIT in 2008 as a postdoc and is now a member of the Laboratory for Nuclear Science and the MIT Statistics and Data Science Center. Winslow was selected by APS’s Division of Particles and Fields for “leadership in the search for axion-like particles that may be dark matter candidates, and for the establishment of the groundbreaking ABRACADABRA detector for this search, and also for valuable detector development for the field of neutrinoless double beta decay.”

Bilge Yildiz is the Breene M. Kerr (1951) Professor of Nuclear Science and Engineering, and Professor of Materials Science and Engineering. Yildiz received her PhD at MIT in 2003 and returned to the Institute on the faculty in nuclear science and engineering in 2007. Yildiz was selected by the APS Division of Materials Physics for “innovative contributions to understanding and manipulating ionic defects and charge transport at electro-chemo-mechanically coupled oxide interfaces and devices.”