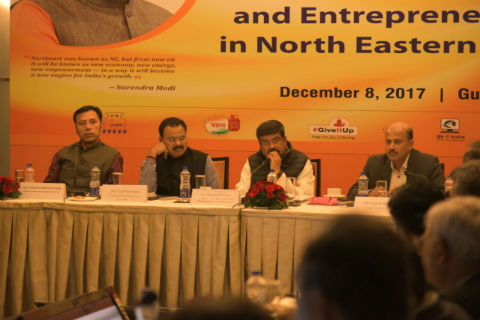 “Skill development to be customized to trades in North East States; Special focus to be on Apprenticeship” says Minister Dharmendra Pradhan

Guwahati: Shri Dharmendra Pradhan, Minister for Petroleum and Natural Gas and Minister of Skill Development and Entrepreneurship, today presided over a high-profile “Review Meeting of Skill Development” which saw a strong representation from State Skill Development Missions and Department of Labor from States like Arunachal Pradesh, Assam, Manipur, Meghalaya, Mizoram, Nagaland and Tripura.
Shri Pradhan emphasizing on the fact that there is a strong need to bring scale to the skill development agenda in the North-East Region of India said that the respective authorities, while creating a way forward plan should keep in mind the local trades that are key focus for the industries and the youth in North East. He said, “Skill Development is one of the key focus areas of this Union Govt. aimed at providing employable skills leading to wage and self-employment opportunities and is the vision of our Hon’ble Prime Minister for a New India. There is a special focus on North East for skills and it is imperative that the States and the Centre work in collaboratively in conjunction with each other in a mission mode to achieve this dream of a skilled nation.”
In a presentation made to the States, it was informed that Ministry of Skill Development and Entrepreneurship (MSDE) as on date has 81 partners imparting training in 24 sectors and 70 job roles and is implementing Skilling scheme of MDoNER in all 8 States as well. More than 14 of out of 30 allocated districts for Pradhan Mantri Kaushal Kendras, have a centre established today in the north-eastern region.
MSDE has tentatively allocated 1232 crore for skill development initiatives to be undertaken over the next 4 years under the Central and State component under its flagship scheme the Pradhan Mantri Kaushal Vikas Yojana (PMKVY); out of which 188 crores has been disbursed. Under PMKVY (2016-20), till date around 36,945 candidates have enrolled under the short-term training program while another 26,063 have enrolled under the Recognition of Prior Learning (RPL) program under the scheme.
Following Shri Pradhan’s emphasis on the need for making Recognition of Prior Learning (RPL) program, specific to trades relevant to the States, MSDE has so far covered sectors like textile, agriculture, food processing, rubber, beauty & wellness, logistics, construction, BFSI, telecom, security, furniture & fittings benefiting farmers, weavers, women, rubber plantation workers. Special projects have also been conducted in the region with Bru Refugees in Tripura, Homestay training in Nagaland and Arunachal Pradesh, Social Welfare Department and State Skill Society in Mizoram; and with NHIDClL on infrastructure equipment training in Arunachal Pradesh & Tripura with captive placement.
The State Skill Development Mission representatives and dignitaries from Department Labour from NE States shared their local challenges and landscape which needed a special focus on skills. All stakeholders were requested to create a roadmap for improving the Skill ecosystem by harnessing local expertise and through involvement of state governments.
“North East has a huge potential to be tapped for a better future of its youth. The employability is much more here than rest of the country because of two things – one is here people are hard-working and second is they are honest,” said Shri Pradhan.
Shri Pradhan mentioned, “We will organize a two- day workshop in Guwahati involving all stakeholders, including academic institutions to formalize a roadmap for short- term skilling, RPL and for promoting entrepreneurship. There is a requirement of appropriate skill sets, matching the job roles are specific and unique to a State. Matching and mapping of such requirements needs active participation and involvement of state governments.”
“Mizoram, Assam and Tripura should have emphasis on skill focused on hydrocarbon sector / oil sector. We should have clear mechanism aligned with the banks to provide load to the trained candidates extending entrepreneurial opportunities their way so that not only they have a job but also become job creators in their segment,” he further added.
Shri Pradhan also emphasized on the enabling short term courses in B. Com colleges on GST so that the youth is in sync with the financial reforms that the country is experiencing and upgrading itself to. He said students and candidates should be given extensive opportunity to engage as apprentices with establishments/corporate in the region so that they can get more hands-on industry standard on the job training.
Under long term initiatives, the representatives from the Ministry shared that it is focusing on upgradation of existing ITIs by – introducing 3 new trades per ITIs (total 20 ITIs). It will also be supplementing infrastructure deficiencies in 28 ITIs by constructing new hostel, boundary wall and supplementing old/obsolete tools and equipment. It was shared that soon 22 new ITIs will be established across the 8 states and the NAPS scheme focusing on apprenticeship training will soon be introduced – aiming to catalyze the entire apprenticeship ecosystem in the country. There is also an exclusive focus on NE region as part of the VTIP scheme and upgradation of 1396 ITIs.
The review meeting also showcased strong corporate social responsibility contributions that have additionally been made to skill development in the region with partners like NEEPCO, RECL, NHPC and Power Grid, to give an impetus to skill initiatives for the youth in North-East India. 30% of total requests for training partner and training center onboarding on the SMART portal has been received from the NE States which clearly reflects the enthusiasm for skill development in the region.
Some of the policy initiatives motivating the youth to undertake skills training are that boarding, and lodging payout has been approved for 50% of trainings being conducted within North-east region; and there is a complete boarding and lodging payout provided to candidates undergoing trainings out of 8 NE States.

iednewsdesk May 20, 2022
University of California Television (UCTV) is celebrating a major achievement with the acquisition of its…