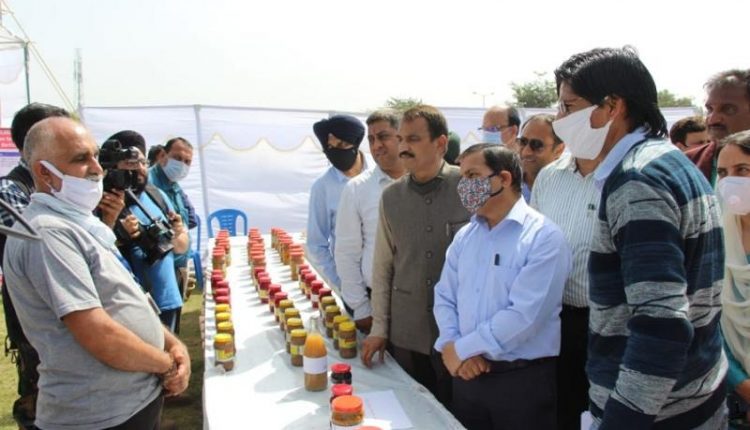 Jammu : An impressive fruit and vegetable show was today organized at Sher-e-Kashmir University of Agricultural Sciences and Technology (SKUAST) – Jammu on the third day of Kisan Mela.

Speaking at the fruit and vegetable show, Ram Sevak suggested to the farmers to cultivate improved varieties of fruit and vegetable crops for realizing maximum profit. He urged the farmers for judicious application of plant protection measures in vegetable and fruit crops keeping in view the safety of health of the consumers. He thanked SKUAST-Jammu for organizing five day long Kisan Mela in coordination with other line departments. He suggested that such Kisan Melas should be organized regularly for creating awareness among the farmers.

Meanwhile, an awareness programme on agriculture education for the school children was also organized in which more than hundred school children participated. Lectures on scope, prospects and opportunities in agriculture and veterinary sciences were delivered by the experts.

Industry-Academia meet was also organized to sensitize the progressive farmers and industry persons about the improved and proven technologies developed by SKUAST-Jammu scientists so that these technologies can be commercialized for the larger interest of the farming community.

Director Industries & Commerce, Jammu, Anu Malhotra, was the Chief Guest on the occasion and M.D. J&K UT Agro Industries Bhawani Rakhwal, was the Guest of Honour.

The Director Industries, in her address spoke about the government policies and also stressed on providing the marketing support to farmers. She also invited entrepreneurs for setting up wool processing clusters and said that the government was ready to allot land for the same in the Industrial area.

During the programme scientists of the university deliberated on the technologies of university viz., animal feed technologies, processing of milk and meat products, mineral mixtures, automated times based variable speed device for a sprinkler irrigation system, hydroponic, potential and prospects of newly released basmati varieties, biopesticides and food processing technologies.

The M.D. Agro Industries invited agri-preneurs for marketing of their products through Agro-Industries as they are already in marketing of various commodities like Honey and Saffron.

Prof. J. P. Sharma, Vice Chancellor in his remarks congratulated the organizing team for conducting Industria-Academia meet successfully. He appreciated the efforts for taking the initiative and advised to organize more such types of events in future also.

Earlier, Prof. Jyoti Kachroo, Coordinator of the program, welcomed the guests and briefed about the event.

She also discussed the RKVY-RAFTAAR scheme run by the University for agri-startups.

All the statutory officers, concerned faculty members and students also attended the programme.

Vote of Thanks was presented by Dr. Anju Bhat, Head, FST. The proceedings of the training program were conducted by Dr. Vinod Gupta, Sr. Scientist & Head, KVK, Samba.

Besides training on Bee Keeping for 50 farmers was also organized at Bee Keeping Unit of SKUAST-Jammu Chatha.

University of Nottingham: University’s largest ever funding award for UK’s most…

University of Nottingham: Study to investigate ‘invisible’ women in…

University of Nottingham: Pioneering community energy scheme on the…