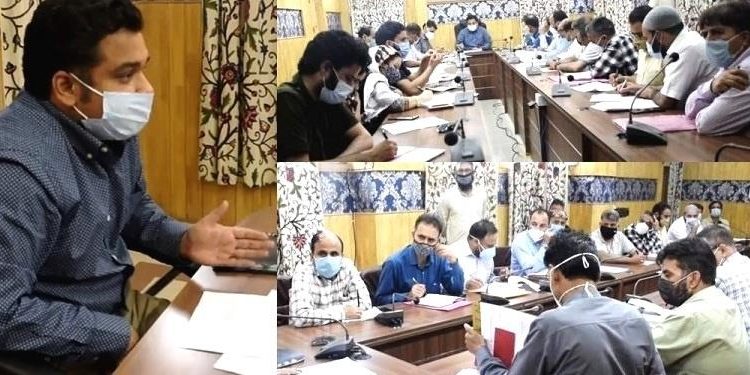 Anantnag : The District Development Commissioner (DDC) Anantnag, Dr. Piyush Singla today said the smooth execution of works authorised under Back to Village programme is top priority of the government and the completion of such works will ensure holistic socio-economic development and public welfare in the district.

The DDC said this during a review meeting of the Back to Village programme with officers of Planning, RDD, JAKEDA, Hydraulic, PDD and other departments here.

The DDC impressed upon the concerned officers to speed up the pace of works taken under the programme, so that they get completed within the stipulated time frame.

Chief Planning Officer informed the chair that 490 works have been accorded out of a total of 1027 authorised works under various sectors in the district.

On the occasion, the DDC sought a detailed account of various ongoing and tendered works under the programme from the concerned officers who briefed him about the physical and financial progress on such works.

The meeting also discussed the status of work estimation and tendering process of the works approved under the programme.

Dr. Singla issued directions for completing the work estimation process besides tendering process on all B2V works so that they are taken up at an earliest and completed during the ongoing working season. He also stressed for regular monitoring of works and directed the officers to meet the targets and set timelines for the completion of vital projects in the district.

He called upon the concerned officers to ensure maximum cooperation for effective implementation of development activities in the district.

Earlier in a separate meeting, the DDC reviewed the progress and achievements made by the district in Livelihood Generation, Mumkin Scheme. The DDC directed for generating requisite awareness among the youth regarding the benefits of the scheme. He impressed upon the concerned officers to ensure the eligible youth are enrolled under the scheme in a time bound manner so that they avail sustainable employment opportunities.