This initiative for One Stop Centre Functionaries in the category of Centre Administrator and Counsellors and the concerned officials will come together to understand, discuss and deliberate on strengthening the multisector response to address violence against women through the Sakhi One Stop Centres across the country.

The Ministry has approved Scheme for setting up One Stop Centre (OSC) to support women affected by violence on 4th March, 2015. Popularly known as Sakhi, the scheme is being implemented since 1st April 2015. The scheme aims to facilitate access to an integrated range of services including medical aid, police assistance, legal aid/case management, psychosocial counselling, and temporary support services to women affected by violence.

Under the scheme, it has been envisaged that OSCs would be set up across the country in a phased manner. In the first phase, one Centre was sanctioned per State/UT. Further, 150 additional Centres are taken up in second phase. 50 additional OSCs have been recently approved by the Ministry. Currently 168 OSCs are operational in 32 States/UTs. So far, around 70,000 cases have been reported at the Centres.

The Ministry is also looking forward to improve the quality services at the Centres. This National Workshop is to bring together cross learning from the States/UTs regarding the best practices, first hand experiences of the OSC functionaries and understand the issues and challenges being faced by them, Standard operating procedures and protocols etc. to enhance a strengthened multi sector response at OSCs while improving the quality of services at OSCs.

In the post lunch session, 5 States will be presenting their best practices of OSC namely Chhattisgarh, Gujarat, Madhya Pradesh, Nagaland and Uttar Pradesh. Minister of State, Shri Dr. Virender Kumar will also address the participants in the Workshop. Central Social Welfare Board (CSWB) of WCD Ministry will also make a presentation regarding the role of Family Counselling Centres (FCC) and its linkages with OSCs. 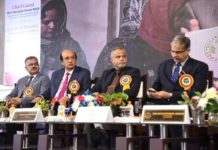