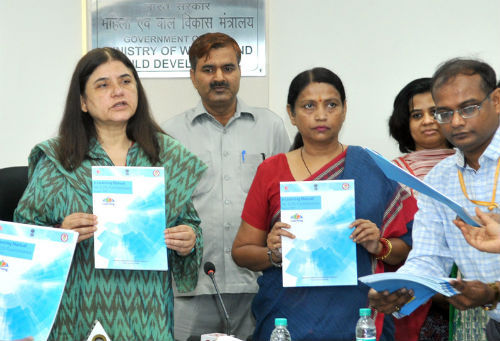 Smt Maneka Sanjay Gandhi also released an important training module for anganwadi workers called Early Childhood Care and Education Training Module. The training module is designed to provide the anganwadi workers a basic understanding of the ECCE curriculum and pedagogical approaches to ensure optimal and holistic development of young children so that they are ready to start formal schooling at the age of six years. It also includes a component on psycho social development of children below the age of three years, to help anganwadi workers counsel parents/caregivers on early stimulation.

Speaking on the occasion, Smt Maneka Sanjay Gandhi said that ECCE training module is a landmark achievement since the government has for the first time ever prepared norms for anganwadi workers to impart pre-school education. Since pre-school education lays the foundation of a child for the future, it is very important to have norms under which anganwadi workers are able to plan and conduct appropriate ECE activities for 3-6 year old children. She urged the State Governments to complete the training of anganwadi workers for ECCE within a year so that the new norms can be implemented at the earliest possible. Smt Maneka Gandhi also asked the States to print advertisements about Childline (1098), POCSO e-box and healthy eating habits at the back of exercise books and text books of all school children.

The Minister of State for Women & Child Development, Smt Krishna Raj said that the pan-India expansion of PMMVY will benefit women across the country.

Secretary WCD, Shri Rakesh Srivastav assured that since the guidelines of PMMVY have now been issued, funds under the scheme will be transferred to the States very soon. He expressed gratitude to UNICEF and Ambedkar University for assisting in developing the booklets.

Some of the other booklets which were issued today included Activity Books for Children of 3-6 years, Child Assessment Card and Recommended List for Play and Learning Material. The Common Application Software for PMMVY and software user manual for PMMVY-CAS were also launched on the occasion. To maintain transparency and timely disbursal of benefits, the PMMVY Scheme will be run through PMMVY-CAS Software.