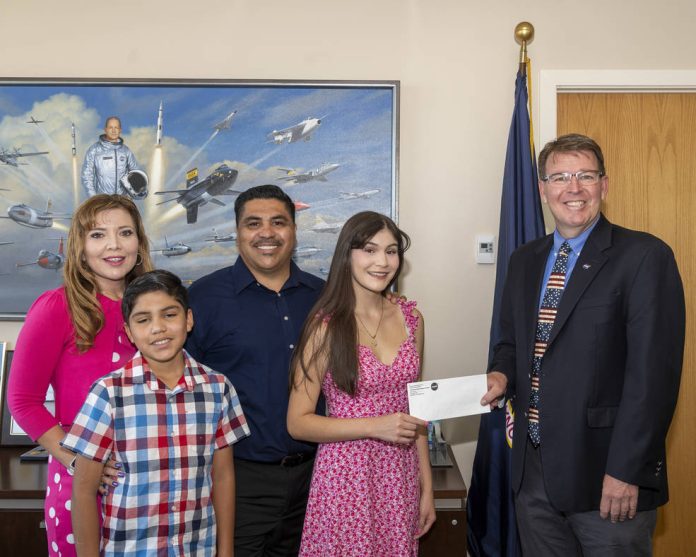 Perez is a 2022 graduate of Students on Academic Rise (SOAR) High School in Lancaster, California, who plans to major this fall in English at the University of California, Irvine. She earned a 4.57 grade-point average and ranked 36 academically at her high school out of a class of 114 students.

The scholarship provides $2,000 per year for up to four years for attendance at a four-year college or university, provided the recipient maintains a minimum grade-point average of 3.0 or higher. Applicants for the annual scholarship must be high school seniors with a parent working at NASA Armstrong.

Perez was surprised when she learned of her selection.

“I could not believe it,” Perez said. “This is the first scholarship I have won and I’m excited!”

She is the daughter of Carlos and Annamarie Perez of Lancaster, California. Carlos Perez is the NASA Armstrong X-59 lead quality assurance specialist.

“It was great news for our family,” her father said.

Katelyn Perez wants to be a community college or university English professor, share her love for literature, and inspire students. She credits her work ethic to her parents and her love of literature and enthusiasm for teaching to her mother, who is an English professor at Antelope Valley College.

“My mom raised three kids and sometimes worked two jobs,” Perez said. “I was inspired. I had some great teachers and my mother’s example of what I want to do. Any great teacher wants to inspire, and I want to be like them and do that.”

Annamarie Perez is proud of her daughter, who she taught in sophomore year of high school, and supports her career choice.

“Katelyn will help future generations to get ahead and succeed in college,” she said. “Education is the best tool to change the world because it opens doors and provides access to opportunities.”

To prepare for her future, Perez completed the Antelope Valley College Honors Program while attending high school. She excelled in advanced placement and honors classes, earned the California State Seal of Biliteracy, received the National Honor Society Medal, and graduated as a member of the California Scholarship Federation.

At SOAR, she was vice president of the Christian club, and was treasurer for the National Honors Society, the California Scholarship Federation, and for the school’s journalism program. She published articles in the school’s monthly newspaper, and was lead anchor on the school’s news broadcasts, both called the SOARce. Perez participated in student government, mentored new students, was a member of the Hispanic and LatinX Heritage Club, the Key Club, a tutor, and active in her church.

NASA Armstrong Exchange Council scholarships are named for five former Armstrong employees, with honorees selected on a rotating basis. Russell, who is named on the current scholarship, was the original crew chief for Chuck Yeager on the X-1 program that resulted in achieving speeds above Mach 1. Russell later flew as one of the panel operators when the X-15 rocket plane launched from the NASA B-52 and reached the edge of space.

In addition to Russell, the other four people are Thomas Finch, a center engineer who specialized in stability and control; Joseph Vensel, a former director of Flight Operations; Harold Walker, a former chief of the Aerodynamics Branch; and Joseph Walker, a chief test pilot. Scholarship funds are raised from council activities.