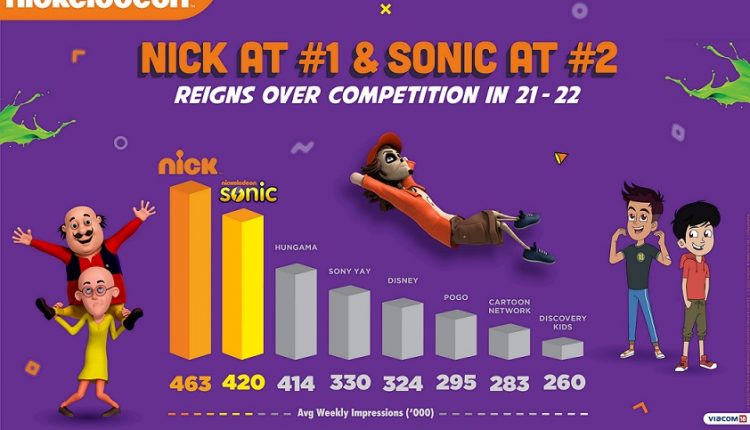 Soaring higher each year, Nickelodeon continues to dominate the pole position as the No. 1 Kids’ network in India

Mumbai, India: Building the category through immersive storytelling and path-breaking innovation, Viacom18’s kids’ franchise, Nickelodeon has established leadership in the kids’ entertainment space and enjoys a cumulative network share of 32% within the genre. The franchise today delivers the highest reach of 48 million kids’ weeks on week and boasts of the largest home-grown content library created through launching 11 successful IPs in 11 years. Closing the year on a high note and with a spirit to deepen engagement and connect, the pioneering franchise continues to top the charts with 2 channels, Nick and SONIC. With Nick at No. 1 and SONIC at No. 2 in the kids’ genre for FY22, Nickelodeon continues to cement its position as a category leader.

Viacom18 Hindi Mass Entertainment & Kids TV Network Head, Nina Elavia Jaipuria said, “The kids’ category is one of the most exciting and dynamic categories in India. The young viewer has always been at the centre of our universe and understanding their evolving preferences has been of prime importance to us. Continuing to lead the demanding kids’ space is a testimony of our sincere efforts to ensure that we create stories and introduce kids to characters that are relatable, relevant and capture their minds and hearts. It is this connect that has allowed us to garner immense love from kids as well as patronage from our brand partners. As the leader of the category, we will continue to engage and innovate with our stories and reach out meaningfully to kids across screens and touch points.”

SAMS joins the ‘Seaweed Revolution’ as it opens new training…

TCS Positioned as a Leader in Worldwide Life Science Sales…

Building on an unparalleled leadership story, Nickelodeon leaves no stone un-turned as it plans for a fun-filled and unforgettable summer for kids that will bring back the touch, feel and play experience. The franchise is all geared to entertain its young viewers with an engaging and fun line up of characters, stories and priceless experiences replete with comedy, action and adventure. The stories will come to life across screens on the franchise channels Nick, Sonic, Nick Jr. and Nick HD+ with all our home-grown character stories also being available on our digital destination Voot Kids.

Nick will see new stories of all of kid’s favourite toons with all new episodes of Rudra, Shiva, Motu Patlu and Chikoo aur Bunty as well as many blockbusters made for TV movie premieres. This will include Motu Patlu & The Secret of Devil’s Heart that will premiere on 29th May and the first ever combo movie premiere of the super cool Shiva and Rudra film called Rudra Shiva Vs Pirates Of Universe that is all set to premiere on Sunday 24th April at 11:30 am on Nick and Voot Kids.
Further SONIC, the second leading channel in the kids’ space is all set to bring back the fun and thrill with new episodes of Golmaal Jr, Pakdam Pakdai, Pinaki and Happy The Bhoot Bandhus. Further catering to the ever-growing content demands of its young viewers the summer season is all set to introduce a new adventure filled ‘smurfiness’ with the much-loved international franchise, The Smurfs all set to entertain kids with their comic capers starting this June.
Kids will continue to be entertained on Nick Jr with many fairy-licious treats, pawsomeness overload and oinkastic adventures with all new episodes of Butter Bean Café, Paw Patrol and the Peppa Pig. The entertainment on Nick Jr. will further see kids have a great time with the premiere of the year’s most popular pre-school series Baby Shark, making its Indian television debut in the month of May

After Telangana/ Andhra Pradesh, ByteXL, an ed-tech startup forays in Maharashtra; to train 2,500 students on new age technologies to make them IT career ready

MIT researchers can now estimate how much information data are likely to contain,…

India Education Diary Bureau Admin Apr 26, 2022
Not all data are created equal. But how much information is any piece of data likely to contain? This…

Ghent University: EU funding for the development of technology towards…

RV University recognized for its outstanding contribution to CSR in…

Leiden University: Young social scientists network away during the…