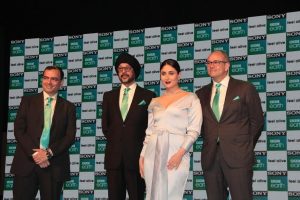 Chennai: The much-awaited Sony BBC Earth has been launched in India. It will go live on March 6, 2017 at 20:00 hrs.
Sony BBC Earth is a premium factual entertainment channel brought to you by MSM Worldwide Factual Media – a joint venture between Sony Pictures Networks India (SPN) and BBC Worldwide.
The JV partnership combines SPN’s extensive experience and expertise in operating and distributing televised entertainment both to audiences in India and across the globe,with BBC Worldwide’s extensive catalogue of programming and reputation for excellence in premium factual content.

As a key differentiator in its category, the channel will have defined programming slots – Why, How & What on Earth @ 8:00PM forfun and insightful science,Wild Wild Earth @ 9:00PM for nature and wildlife, and Earth Explorers @ 10:00PM for adventure and human interest stories. Weekends will showcase distinctive stories with a special slot;Earth Specials. Key launch shows include The Hunt, Where The Wild Men Are with Ben Fogle, Trust Me I’m A Doctor, Snow Chickandthe iconic, greatly anticipated series,Planet Earth II amongst others.

Sony BBC Earth will be available in both SD and HD in English, Hindi, Tamil and Telugu.

The channel has created a unique brand film with its‘Feel Alive’ Ambassador Kareena Kapoor Khan, which beautifully brings alive the feeling of subliminal happiness that Kareena experiences while exploring the compelling content on Sony BBC Earth and expresses what it is to Feel Alive. The campaign will be launched on a massive scale across multiple mass media and social media platforms.

“Sony Pictures Networks is known to create compelling and differentiated brands across all genres that it operates in. Nurtured as a JV partnership, Sony BBC Earth, combines the strengths of both partners; including fascinating content, estimable brand equity and superior sales and distribution prowess.This gives Sony BBC Earth a distinct positioning and watchability. I am confident that this channel will be amajor player in its category.”

“Our relationship with Sony has been a long one, built in the first instance on our production business, and one that has since grown across all key areas of BBC Worldwide’s operations. We partner with them to bring top programmes like Sherlock, Orphan Black and Top Gear on AXN to our fans in India, and now, this joint venture which is a pioneering model for us. By working with a respected local partner of the caliber of Sony Pictures Networks, we look forward to bringing BBC Earth’s world class content to a new audience who we know has a huge appetite for premium factual programming.”

“SPN’s philosophy is to create brands based on deep consumer understanding. We have worked extensively with viewers to sharpen our insights into what they want and have synergised this understanding with our compelling content and storytelling. Our brand positioning of ‘Feel Alive’ captures the emotion of subliminal happiness which viewers experience when they consume our content. This has been brought to life through a clutter-breaking film featuring our ‘Feel Alive’ ambassador, Kareena Kapoor Khan – whose persona embodies positivity, happiness and full of life demeanour that naturally blends with what our channel and its content stands for.”
Kareena Kapoor Khan, ‘Feel Alive’ Ambassador, Sony BBC Earth.

“Nature, wildlife and adventure are three things that have always fascinated me. I am also a huge fan of Sir David Attenborough. The brand message of ‘Feel Alive’ has a positive ring to it that resonates with my persona and beliefs. The brand film captures snippets of the content and the emotion of Feel Alive beautifully. I am sure that Sony BBC Earth will makethe viewers‘Feel Alive’ just the way I did when I watched some episodes of its fantastic shows. I know for a fact that I am going to be tuning in regularly to Sony BBC Earth.”