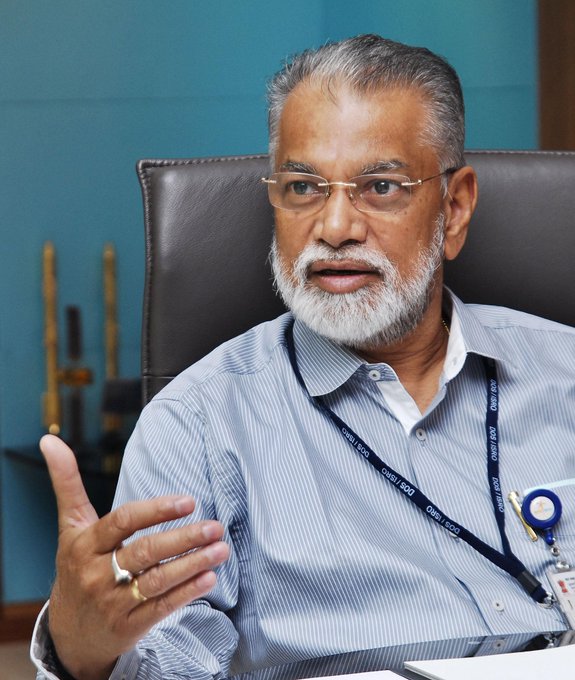 New Delhi: Government is restructuring the space sector and there is a huge business opportunity for Indian startups, according to Dr K Radhakrishnan, former Chairman of Indian Space Research Organization (ISRO).

Speaking at LeaderSpeak, an online interaction with business leaders organized by All India Management Association (AIMA), he said that Indian startups can do major things in space on the model of SpaceX. “In 10 years, we should see many contributors in the cutting-edge areas of space,” he said.

Mr Sanjay Kirloskar, President, AIMA moderated the session and Ms Rekha Sethi, Director General, AIMA anchored it. Mr Kirloskar lauded ISRO for making India one of the leaders in space technology and expressed confidence that India would climb up the rankings in space capabilities from the current sixth position to the top two or three in the next few years.

“Indian startups can deliver space-based applications and ground equipment for using space services,” Former ISRO chief said. He identified ground equipment and services as the best entry point in the space market for India’s private sector. He pointed out that 70% of the $366 billion global space economy was ground facilities. Moreover, ground hardware and services had the shortest gestation period. However, he said that Indian companies would have to collaborate with foreign companies for the electronics because India was not even among the top 50 nations in electronics.

Dr Radhakrishnan rules out space rockets as an immediate area for startups. “Launch vehicle is a guarded technology and one will have to develop it from scratch. It has a long lead time,” he said.

Simultaneously, ISRO is working on Aditya Mission, a project to place a spacecraft in the orbit between Earth and Sun. It is also working on a new moon lander, newer propulsion systems for rockets, and more powerful satellites.

India is also ready to launch a regional positioning system (RPS) over the Indian Ocean region and the ground systems are getting ready to work with a constellation of seven satellites, Dr Radhakrishnan informed. “With this RPS, we will have assured signal even in difficult times,” he said.

Commenting on China’s space capability, Dr Radhakrishnan said that China was far ahead of India in human space flight and quite advanced in space launch vehicles. “China is putting far more resources in their space programme than India,” he said. However, he pointed out that China was behind in the race to Mars.

Explaining ISRO’s ability to do space activities much cheaper than anybody else, Dr Radhakrishnan said that ISRO had standardized and optimized key parts and systems, which lowered the development cost. “We don’t have to reinvent for each project,” he said. In addition, he pointed out, ISRO could count on its people to work 80 hours a week whereas in the west the space scientists were contracted to work for 30 hours a week. “For us, it is a devotion to the country,” he said.

The All India Management Association (AIMA) is the apex body for management in India with over 38000 members and close to 6000 corporate /institutional members through 66 Local Management Associations affiliated to it. AIMA was formed over 60 years ago and is a non-lobbying, not for profit organisation, working closely with industry, Government, academia and students, to further the cause of the management profession in India.

The association is represented on a number of policy making bodies of the Government of India and national associations including All India Council for Technical Education (AICTE), which is the apex regulatory body for professional education in the country under the Ministry of Human Resource Development; National Board of Accreditation (NBA); Association of Indian Management Schools, Hyderabad; National Productivity Council, New Delhi.

AIMA also brings to the Indian managers, the best management practices and techniques through numerous foreign collaborations with professional bodies and institutions. AIMA is an important and long-time member of the Asian Association of Management Organisations (AAMO), which promotes professional management in the Asia Pacific region. India (AIMA) took over the Presidency of AAMO in 2019 and will hold the AAMO Secretariat for the next three years. In addition, AIMA has developed close associations with several leading international Universities and Institutions including Imperial College, University of Berkeley, California, St Gallen Symposium, Horasis, The World Bank etc, to name a few.