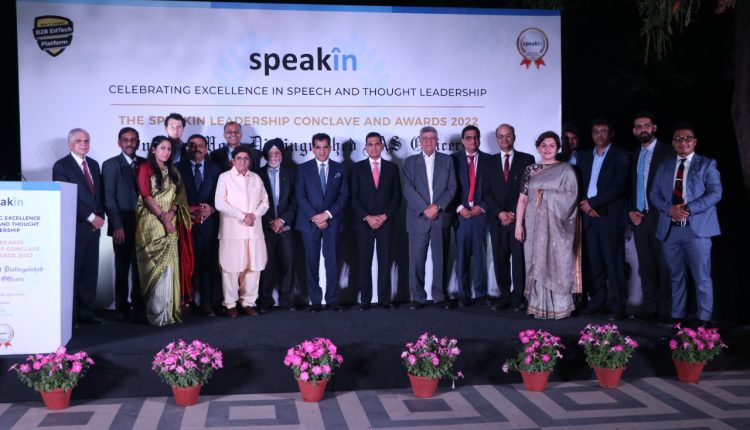 New Delhi: At an awards function in New Delhi this evening, SpeakIn recognised and honoured India’s Most Distinguished IAS Officers for administrative distinction and for excellence in speech and thought leadership. SpeakIn is Asia’s first and largest consortium of Thought Leaders, Industry Influencers, Speakers, and Subject Matter Experts.

At what is being described as India’s first and finest celebrations of the contribution of civil services fraternity to governance and public administration, the IAS officers were honoured for addressing some of the biggest and most ardous challenges facing the country and helping resolve them.

Among the ten IAS awardees was Amitabh Kant, a 1980 batch IAS officer, who won the Lifetime Achievement Award. Mr. Kant is currently the CEO of Niti Aayog. He has been a key driver of the “Make in India” and “Startup India” initiatives. He also drove the “Ease of Doing Business” initiative. Accepting his award, Amitabh Kant said, “There is no job content anywhere in the world like the Indian Administrative Service that gives you an opportunity to transform lives. You can be a great disruptor and bring in radical changes that actually impact the lives of the people of this country. I thank SpeakIn for recognizing this diligence and to have honoured the leaders in services.”

Others recognised for their stellar contribution included Anil Srivastava, who was awarded for Heavy Industries, Transport and Mobility and Armstrong Pame, recognised for his contribution to Public Policy and Governance.  The event was attended by top civil services, corporate and industry thought leaders.

Commenting on the changing face of the India bureaucracy in sync with the changing times, award-winner Anil Srivastava said: “Public service is process driven. It cannot be run like a fast-paced business, aiming at immediate results. We are answerable to the public who are our stakeholders. There are no shareholders who need profits. But we create a framework and lay down the processes, so that the public finds a conducive environment to function. Our aim is to be inclusive, work for the welfare of our country and have a forward-looking vision that sets the pace for the relevant stakeholders to follow.”

Speaking about the rationale for awarding top performers of India’s elite civil service, Deepshikha Kumar, Founder and CEO of SpeakIn, said: “When it comes to leadership skills and knowledge of the country’s law and policies, our civil servants are exemplary. At SpeakIn we celebrate top performers and thought leaders who lead by example and set the bar high in terms of performance and delivery. IAS officers implement complex policies and projects and enable the executive’s connect with the larger population. The government’s job is dealing with issues that need to be dealt with—and that’s what our administrators do. We owe them a debt of gratitude.”

•    Amitabh Kant, 1980 batch (Kerala cadre): Lifetime Achievement award, for his journey studded with integrity and conviction. Kant has been a key driver of the”Make in India” and “Startup India” initiatives. He also drove the “Ease of Doing Business” initiative.

•    Suhas Lalinakere Yathiraj, 2007 batch (UP cadre) for “Excellence in Public Policy and Governance”

University of Maryland: $2.6M in DOD Grants to Fund Studies of Climate Change Impact on Security