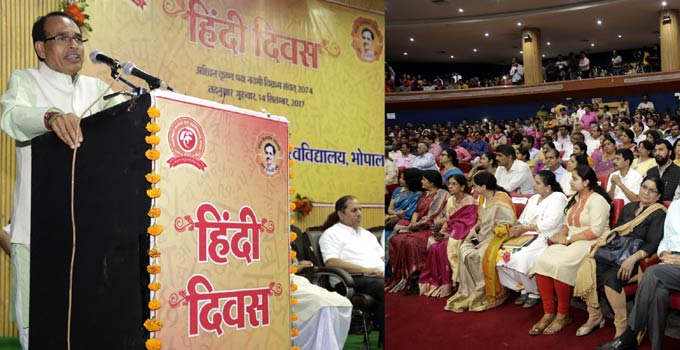 Speaking, reading and writing in Hindi should be a matter of pride: Madhya Pradesh CM Chouhan

Bhopal : Chief Minister Shri Shivraj Singh Chouhan said that Hindi is the most flourishing language and narrow-mindedness towards it is not right. Speaking in English and ignoring Hindi is a sign of mental slavery. He said that we should take pride in speaking, reading and writing in Hindi. Even the society shall have to come forward in raising the honour of Hindi.

CM Shri Chouhan was addressing a gathering at the Hindi Divas programme by the Atal Behari Vajpayee Hindi University on the occasion of Hindi Divas at Samanvay Bhavan here today.

Shri Chouhan said that private universities will be directed to establish Hindi Departments. Making an announcement to organize state-level Hindi Sammelans in every two years, he said that state-level Hindi Sammelan will be organized on coming December 16-17. Intellectuals, individuals and institutions working towards promoting Hindi will be invited for the sammelan. Shri Chouhan said that Late Shri Dushyant Kumar Tyagi was the founder of Hindi ghazals. State government will build the Dushyant Kumar Museum in his memory.

Campaign to promote power of Hindi

Shri Chouhan said that legal measures will be taken to make Hindi names on shops and information plaques mandatory. A continuous campaign would have to be launched with the support of the society to apprise the new generation with the power, capacity and potential of Hindi language.

Use of Hindi lauded

Recalling his foreign tours Shri Chouhan told that he gave speeches and conversed in Hindi everywhere. He said that use of Hindi not only raised his prestige but also got him appreciation. On Shri Atal Behari Vajpayee’s address in Hindi at the United Nations Organisation, he said that Hindi is heading forward constantly but we must remain alert to expect its glory. He said that government does not oppose any language but use of English at the cost of Hindi is not right.

Shri Chouhan stressed on the need to promote Hindi courses. Stressing on the conservation of good poetry, verses and prose and its proper presentation, he said that there is need to increase acceptance of Hindi. Shri Chouhan said that all the universities must assemble to celebrate Hindi Divas. The Hindi Divas celebration will be more grand from next year onwards and all universities will participate in it.